This year we have to be ahead of he cleanup game. 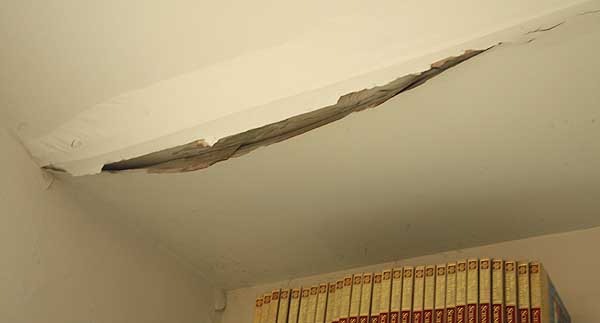 It’s been leaking for a while now, but only a little bit. At first it leaked only a very small amount when the wind was from the south and a certain angle. We got a few drips once a year perhaps. We could live with that, we had to there was no money to fix the roof.

Then Hurricane Sandy came along and really shook things up a lot. During Sandy it managed to find its way down between the wall and produced a nice bulge on one of the walls which later of course all the plaster fell off of. Then fortunately it stopped again at least for a while. Then last winter it began to leak more and drips were coming down from the ceiling, creating a nasty pealing patch.  Not satisfied with that it decided to move the location of the drips around a bit, just to keep us on our toes I suppose. This meant that instead of having one drip tray in the room we had to have several located over several spots in one room. This room is of course the one we had chosen to keep all our books in. So we had to put plastic on top of the bookcases and drip trays along the top as well. Then it moved again and sneaked down the wall in the laundry room (only called that because the washing machine is in there, its more of a mud room come everything room really).

We agreed the time had come, we had to get the roof fixed. We got some quotes and decided on a roofer but got held up looking for someone to dismount our solar panels so we could have the roof redone. That was a bust. They wanted more to get the panels off and on again than it would cost for the roof! What a crock! Fortunately that portion of the roof is not leaking and is well protected by the solar panels so after calling around quite a few places and getting ridiculous quotes we have decided to go ahead and get the rest of the roof done, leave that portion and work on the panels ourselves later. Then get that portion done. The roofer has no problem with this either. It will cost a bit more but we cant wait around any longer and we don’t have time to do it ourselves this year.

So we signed the contracts, in celebration the heavens have opened and its been raining for two days, we have trays everywhere in the ‘library’ catching water.

Our main problem now is that we have to remove everything from around the house so that they can get to it. I use our patios especially the front one as nurseries for the plants that are not ready to go in the ground yet, or don’t have any space yet. We have a lot of plants crammed on our front patio. We are intended to move them to a temporary hoop house that we will be erecting to protect our larger pots of trees and shrubs, just make it a little bigger and put them in their too. However we had planned to have more time to do this. The roofers are coming in two weeks so we have to get the plants moved NOW.

So before the big rain started we were out laying ground cover fabric where the hoop house is to go and moving some of the plants off the patio to the new area. I loaded up the small cart and we managed to get all the smaller plant pots moved over before the really heavy rain started. We got wet but not too badly.
Unfortunately there are still a lot of plants that are in pots that are too small to overwinter. So a mammoth repotting session was in order. We make up our own potting mixture using mushroom compost as our main base (because its cheap here) adding other elements like pearlite and vermiculite and other thing to get it more aerated and more attractive as yummy plant food. So Steve trekked in compost and made up the mix and I repotted. For six hours straight.

I actually like repotting and I love to do it when its raining. I work in our small ‘greenhouse’ not a real greenhouse yet (its on the wish list) but a screened in porch with plastic on the windows. There is a lot of ventilation available and its you can hear the rain pattering down creating a very pleasant atmosphere to work in. Of course every now and again you get wet dashing outside to either put plants on the patio or collect trays for repotting but it’s a small price to pay.

I finally finished around 7.30pm. All the small plants are now in larger pots and waiting transportation to the hoop house area. Then we just have to move all the other pots off the patio and into the greenhouse for the winter. We don’t usually do this until the end of October when the temperatures fall to freezing but this year with the roofers coming we have to be ahead of the game.