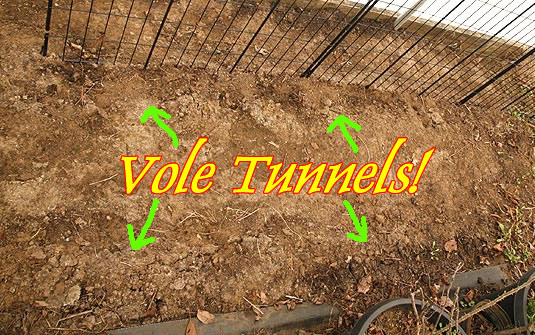 Last year we put up a new hoop house, it’s mostly to protect all the trees we still have in pots from the winter freeze but I decided we had enough space to try growing some early vegetables. So back in early February we moved some pots around, cleared an area added some compost and planted some peas and fava beans. Watered in and went off to a couple of farm conferences.
When we came back about 10 days later I was expecting the seeds to be up. The weather had been pretty much OK and the temperatures inside the hoop house would have risen quite a bit. The willows and hazelnut trees in there were flowering nicely.
When I went to look I was disappointed. There were no sprouts. What there was however was a vole tunnel. You could see where the little bugger had burrowed all the way along the pea row. There were in fact a couple of pea sprouts on the ground. Just the green tops, the vole had eaten the pea seed out and left the green bit.
The tunnel reached the end of the pea row, then doubled back right down the bean row. Everything was gone!

To say I was PO’ed would be putting it mildly. I was looking forward to those early peas. Course they would not be quite as early as I had hoped since the temperatures in the last 10 days have plummeted and we had 10″ of snow last week which is still hanging around on the ground in large clumps. Today we are expecting another 5″ with 7-12″ forecast for tomorrow.
Lovely.

But I refused to be beaten by a damn rodent. So yesterday I marched across the snow to the hoop house and set to work. I am determined to get my early peas. I went in armed with a roll of chicken wire and digging tools. After stripping down to shorts and T-shirt because it’s hot in the hoop house when the sun is out, I got to work.

First I dug out the row where the peas should be, not one was left. I dug a much deeper trench that I would if I was just planting more peas.
Then I cut the chicken wire to the length of the row. Next I bent the wire over double so that the holes of one side were overlapped by the folded side making the hole diameter half what it would be on normal chicken wire.

That done I bent the folded section in half and laid the wire in the trench I had dug.

Then filled the V shaped wire section with soil and planted the peas near the top. Finally I covered the seeds and folded the last third of the chicken wire over the top of the peas so they are now encased in a cage of chicken wire. I then wired the top in place so it won’t spring back up and expose the peas. I then added just a light covering over the whole chicken wire concoction.

Then I did the same thing for the bean row. Finally it was all watered in and I stood back happily tired from my exertions.

Let the little buggers get through that lot to my seeds!

Now I just have to wait and see if it works. It should not bother the pea seeds their roots can easily get through the wire holes. While voles can be quite small I doubt that they can get through those small holes so my seeds should be safe. Now I just have to hope that the mice don’t come along and eat off the shoots when they emerge.

The hoop house is covered in white plastic not clear.  This is to stop the plants inside frying over the winter.  The plastic is there to stop the plant pots from freezing not to make them grow.  White plastic is also useful to ensure that the hoop house does not get too hot for other plants like cool season peas and beans.  Clear plastic would be much too hot and they seeds would most likely fry.  White plastic keeps is warmer but not enough to cook the plants inside.