There is plenty of time for your plants to grow. 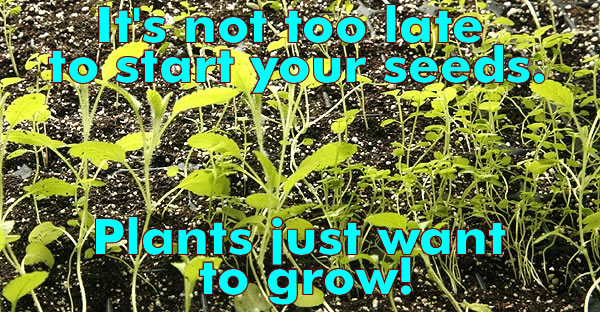 Spring is finally here, and if you are like most people now is when you realize its time to start your seeds. No its not too late even if your well organized friends had their seeds all sown and growing starting back in February there is still plenty of time for you to catch up. Starting seeds in early May is pretty common, and if you want to start them by direct sowing then this is the perfect time to buy your seeds. Depending on where you live early spring may still be on the horizon so don’t worry about being late. Seeds are just happy to grow, if you start them later than your friends they don’t care. As long as you look after them and they get to grow its all good with the seeds.

I always felt somewhat envious of those who were so organized that they has their seeds all sown by mid February. Before we bought our first farm I was always late getting the seeds in. In the end though I still got good plants, pretty flowers and good vegetables, maybe some flowered a little later than my organized friends but in the end it all seemed about the same. Now we have a farm I have to get seeds started early but that does not mean that all seeds get started at the right time. There are many reasons to start seeds later. 1. Life. It tends to go on around you keep you busy until suddenly, wow its spring, and we really need to get these seeds in now! This I suspect is the main reason most people don’t get their seeds in early, there is just too much else calling for attention.

2. Suddenly you realize you need more seeds that you sowed. It often happens. You think you only need 6 tomatoes then find you need 12 more seeds to sow.

3. Something was forgotten. Despite all the good planning, the lists, the checking somehow a species were totally overlooked and did not get seeded. Now there is a frantic rush to get the seeds sown. This happens more often than you would think even with professionals.

4. Some seeds come up really fast. Planting things like marigolds in February would be a problem. The things germinate very quickly and grow fast. Therefore such plants don’t need a lot of lead time for indoor planting. While other plants take a long time to germinate or are very slow to grow and need more time, these fast growers can be left and seeded much later.

5. The first seeds planted did not come up. This can happen for many reasons. It may be they were planted too deep, not watered properly, got a fungal disease or that the seed was not in good condition when it was purchased. See How Are Your Seeds Cared For Before You Get Them? I still have this problem at times since to get new plants and varieties to offer to you I need to buy from overseas sources then grow them to be organic before I can offer them to you. Not all the seeds that we get have been treated very well and they don’t always germinate. (which is a real pain if you have waited 6 months to get the darn things). This is why I always recommend that if you have quite a few seeds don’t plant them all at once. Then if something does go wrong you have a second chance to get it right.

6. Seeds came up then died for some reason, perhaps they were over watered, under watered did not get enough light, the cat sat on them (it happens more often than you think). Now you have to start those seeds all over again. Try to figure out why they died and not repeat the process. Put netting or something around the seed trays to stop the cat jumping on them. If you had seeds and got up one morning to find all that was left were little stalks, check under and around the tray for a slug. They come up in the night and mow down little seedlings.

6. Other reasons, could be anything the world if full of stuff to do and seeds are just one of them.

No matter what the reason there is always time to start more seeds. For some plants direct seeding is the best way to go anyway. Large seeds like beans, peas, okra, giant sunflowers are best direct sown as are things like Calendula and cilantro. Other plants need to be coddled a long time before they are put in the ground since they grow so slowly. No matter what time you start your seeds as long as you look after them then it’s the right time to start them. While its true that starting tomato seeds in August wont get you a crop starting them now will give you tomatoes later in the year than those who started early. If you eat a lot of some crops then starting seeds at different times makes sense anyway as it will space out your crop giving you more food or flowers for a longer period of time.

So don’t be deterred by those who started early and tell you its too late now. Its not. Seeding now is a perfect time. We are still seeding and so should you. Garden in your own time. Be creative and do your own thing.

For details on how to start seeds see. It’s time to start your seeds.