Haze could have a detrimental effect on fall gardening and agriculture. 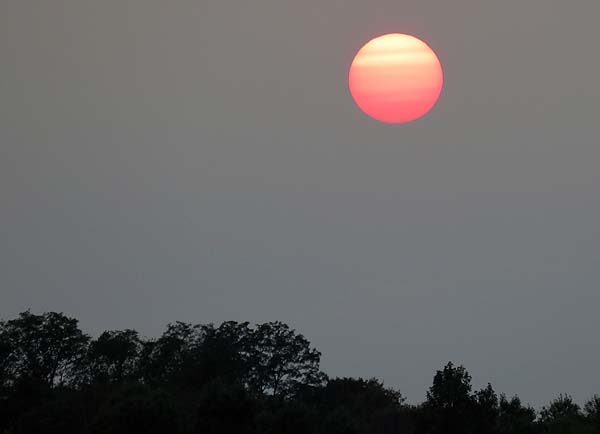 The west coast wildfires are still producing masses of smoke which is drifting on the winds across the rest of North America. This past week the North Eastern States were blanketed in high level haze which reduced the amount of sunlight and turned the sun into a fiery red ball towards sunset. While some stated there would be vivid sunsets in our area the sun sank into a mass of haze before it set offering no possibility of any real sunset at all. While the haze so far has been confined to the high atmosphere there if it continues, or if the wind patterns change, it is possible that it could descend and cause more problems far from the actual wildfires themselves. Many reported increased asthma symptoms during the main hazy period, whether this was due to smoke particles or just a response to just knowing the smoke was up there is hard to determine.
What is certain is that the light levels at ground level were diminished. This can have major effects on the environment.
To begin with plants are getting less light, so photosynthesis can be reduced. The sun is not as strong and this can effect ripening of fruits and vegetables as well as growth rates of plants. It's possible harvests may be slightly later this year if this haze problem were to continue for longer periods.

Another factor is insect behavior. Working in our fields during the hazy days I was surprised to note very few insects roaming around. Normally our flowers especially the Siberian Motherwort is festooned with bees and butterflies but on these days there were none. Not one bee or butterfly. Checking out the caterpillars on many of the designated plants I noticed these were quiescent. Normally they are busy chewing at what remains of the leaves - some plants are now totally denuded of leaves - but the caterpillars are usually busy getting those leaves inside them. Now they were all just sitting there motionless. That prompted me to stop and listen, and yes there was no grasshopper singing, its usually a cacophony at this time of year but on these hazy days they were silent.

Research reports, although few, state that apparently haze can reduce butterfly development, interfere with bee colony flight and change behaviors in many insect species. Not only that but bird behavior is also apparently affected. Birds may not fly as much and bird song is often greatly reduced. While I did not note much in the way of bird song its possible it was diminished.

So for those with gardens its possible that there may be a reduced harvest this fall if insects are not flying and pollinating later flowering plants like peppers, tomatoes and possibly beans. For those expecting to start a fall crop of peas it may cause harvest failure and of course those like ourselves who are seed collectors may have a reduction in harvest if the insects don't pollinate the flowers. Hopefully we will have more rain come through and harmlessly bring down the particles, the remains of hurricane Sally seemed to wash some of the dust from the sky - even though we saw no rain it went past 20 miles east of us. This week is forecast with no rain at all. If the haze builds up again plants will grow less, insects and birds will be less active and harvests could suffer.

With luck any more haze that does reach us will also stay in the upper atmosphere and not decend. That could cause many other problems and many more addtional health issues along with the ones we are already dealing with.

Disappointingly not that much research has been carried out on the impact of haze on agriculture, insect and bird biology. The little that has been done suggests detrimental effects which hopefully will be short lived.