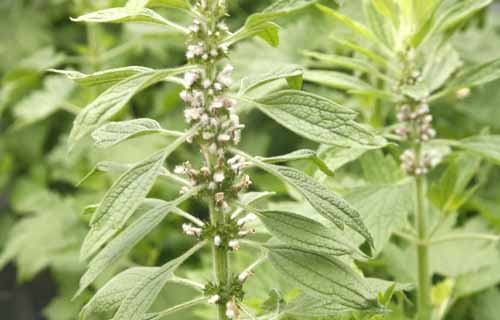 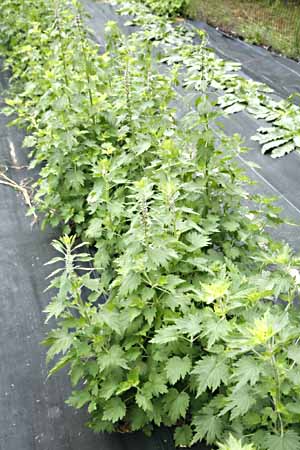 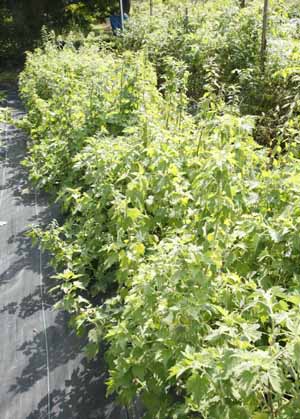 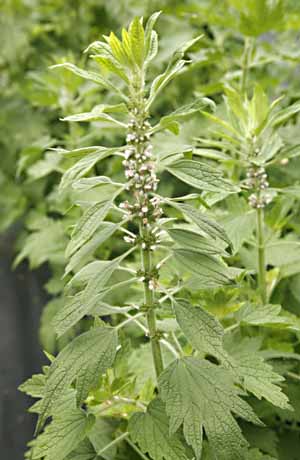 A very tough perennial hardy to zone 3. It will grow on poor soil in full sunshine. Needs little extra water once established unless there is a severe drought. Takes almost no maintenance once established and will grow and self seed easily. Will flower from seed in the first year and the deer and rabbits don't seem to eat it. Easy harvesting of leaves or makes a good cut flower if desired.

A tough little perennial hardy to zone 3. In spring it puts out square erect stems and a profusion of mid green leaves. Leaves are similar to maple leaves only more elongated. Technically described as ovate, lobed and toothed. They are deeply veined and textured. The ones at the base can reach 3 inches in length while those on the stems are much smaller and usually divided into 3 toothed lobes. Stems can reach 3 feet in height and the flowers are situated in bunches around the top portion of the stems. Each flower consists of two lips: the upper one is undivided, the lower one has 3 lobes with purple dots on them. The overall flower color is usually pink but can be white or red and very hairy. Flowers arise in mid to late summer but can be earlier depending on the location and amount of sunshine. Can flower the first year from seed, but flowering will be later in the year than normal. Whole plant has mild aroma which some people find unpleasant. Will remain evergreen in warmer zone and it not killed down by frosts. Deer don't seem to eat it.

Can be sown directly outdoors after danger of frost has passed if sufficient seed is available. More commonly it is sown in pots, plug cells or seed trays in late winter. Plant about 1/8" deep. Germination usually takes 14-21 days depending on temperature and other conditions. Transplant into individual pots and grow on to about 6 inches before hardening off and planting out. Space plants about 15 inches apart to allow for spread. Can self sow once established. Divide and replant clumps in early spring or fall. See our General Growing Instructions for more detailed information on seed starting.

Motherwort is a tough plant and can grow in many places. It is happy on poor soils in full sunshine but it can tolerate some partial shade. While many places state fertile soil stunts growth we have found that adding compost to the soil makes it grow much larger and stronger. Often doubling in size and height making the much more majestic and interesting. Plants do like a well drained soil and don't do was well in poorly drained ones. It likes a fairly neutral soil but can tolerate a pH a little on either side. Takes very little care once established and is fairly drought tolerant.
Depending on what you want the plant for you can water when being established then only if there is prolonged drought, mostly takes care of itself and thrives on neglect. If growing for leaf harvest some additional water with a soaker hose is recommended to ensure a strong prolific crop of leaves. Ideal for areas where not too much grows or that needs plants with little care. The textured leaves give the plant interest and good contrast with many other plants. Flowers from seed in first year but will grow much larger in second year. If growing for leaf harvest expect to replace plants every 4-5 years as they begin to wane. Some plants may die off before this time and need replacing.

Leaves are harvested when the plant is in full bloom or just after. Research studies have shown that the active ingredient of the plant are at their highest at this time. If plants are cut down as the plant flowers new shoots will form and plant will attempt a second flowering. Once harvest can be achieved in the first year from seed and two for several subsequent years. Expect to replace plants about every 5 years.

Motherwort is a calming nervine used for stress-induced palpitations and for mild hypertension. While most commonly known for its use for women's problems such as irregular and painful menstruations; amenorrhea; hot flashes, vertigo, dizziness and other symptoms of menopause. Motherwort has in recent herbalism been confined to use for these issues which is unfortunate since it works quite effectively for soothing tension nervousness, and stress from many causes. It can also help reduce insomnia and calms nervous disorders and relieve headaches.
Motherwort can be a major player in combating cardiovascular problems such as arrhythmia, tachycardia, hypertension; as well as prevention of blood clots, strokes and heart attacks. It is used especially for palpitations and associated hysteria.
This plant has been for centuries used as the means that improve uterine contractions during labour and relieve pain and stress due to childbirth, as well as depression following it. Which is how it got its name. Its remedies also promote milk flow in nursing mothers.

Other uses of Motherwort (Leonurus cardiaca).

Leaves are used to make a excellent green dye. It makes a good cut flower, although some do not like the aroma but it can be dried for later decorative use.

Skin contact with this plant can cause dermatitis in susceptible people. The fragrant essential oil can cause photosensitization. Grazing animals can have their mouths injured by the sharp teeth of the calyces