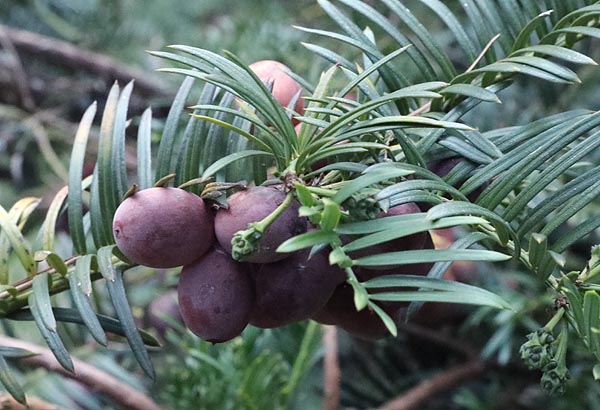 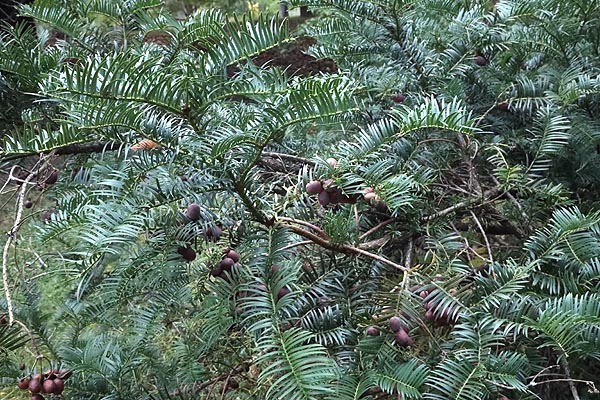 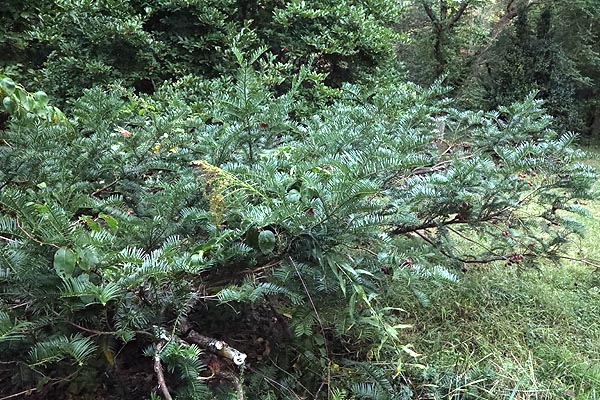 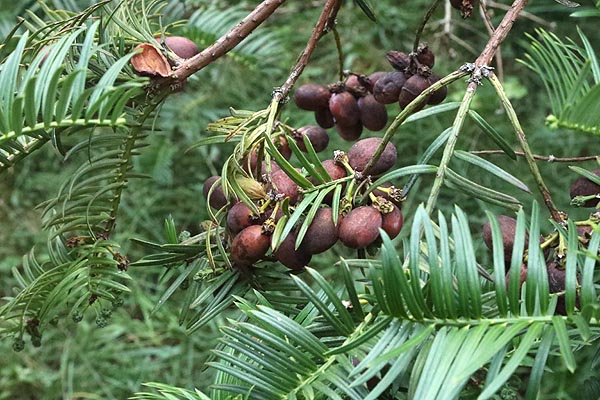 A very attractive fruit bearing shrub for shaded areas. The plum yew produces some really tasty juicy olive sized fruits while growing in a shaded woodland setting, north sides of structures or other shaded locations. Can take a little sun in cooler zones. It looks just like a regular yew bush, but its very slow growing making maintenance low. It's a great choice for topiary due to its slow growth, and better yet even though deer will eat regular yew bushes to the ground they don't touch the plum yew, plus the squirrels don't eat the fruits making it easy to keep your crop without battling wildlife. Plum yews are attractive evergreen shrubs that make great pot plants, borders, hedges and forest understory and give a fruity crop as well. Seeds are more of a challenge to germinate as they need stratification and are slow growing but the results are worth it. Has male and female plants so you will need one of each to get fruits. Perfect plant for shady areas as long as soil is well drained. It's a grow it and forget it plant even if you don't want the fruit.

Typically its grown as a shrub but its very slow growing often taking about 10 years to reach the height of 4 feet (1.2m). The branches of this evergreen perennial start out green as new growth but keep that color for several years before finally turning red-brown to gray brown in color and finally peeling in longitudinal strips. The leaves are produced in pairs that are arranged in a V shaped pattern opposite on the stem in two rows, sometimes these are vertical but may also be flattened. They are needle shaped, dark green on top and much lighter beneath and up to 2 inches (5 cm) in length and 0.12 inch (3 mm) wide. Flowers appear in early spring bushes are dioecious meaning that there are male and female plants so the flowers look different. To obtain fruits both male and female plants are required. One male to about 5 females is sufficient. Female flowers are small and slightly greenish on small curved stalks and are produced at the bases of the shoots often on the underside and can easily be overlooked. Male flowers are brownish pink and look like miniature rosettes these are produced all along the branch from between the leaves and are quite noticeable. They produce prolific amounts of pollen making them attractive to all pollinators. The fruits are produces only on the female plants and grow to the size and shape about ¾- 1 inch (2-3 cm) long and brown in color. Unlike all true yew species these are edible. Hardy to zone 6. Deer and rabbits don't eat them.

Growing Japanese Plum Yew (Cephalotaxus harringtonia) from Seed.
This is one of the more challenging seeds to grow as it needs stratification and germination can be slow and erratic. Some seeds will germinate very quickly when the spring (or warmer period) comes others will not germinate for 18 months requiring a whole year of cold warm cold before they deem to grown.
Since they are so slow to germinate its best to sow them in individual pots. Seeds are fairly large a so 2 inch (5 cm) pot is ideal. In this way they can be monitored and cared for as the seedlings appear.
For outside sowing plant in pots in fall and leave them outside in a shady area over the winter. Just ensure that the pots do not dry out on during sunny spells. Rain and snow are good. Leave snow on top of pots if it forms and allow it to melt naturally. Keep pots in a cool shady spot and be patient bring seedlings our and tend them as they germinate but keep pots around for 2 years or more for the slow ones. Just don't let them dry out during the summer months when its easy to forget about them.
If sowing inside consult our stratification instructions to determine which method is best for you.
All our seeds are kept under refrigerated conditions. We keep the seeds in the fruit as much as possible and only remove it before shipping. This ensures that the seed remains most and cold for as long as possible.

Japanese Plum Yews are very slow growing so keep in the pots until they are large enough to plant out. This can take a year or more and may be best if they are transplanted to a larger pot and cared for before planting out in years 2-4. When ready plant in late spring after all frosts are past.

This is a plant that likes shade. In warmer zones 7a, even 6b, and warmer it will do very well under trees and in a forest setting and wont really like that much sun. As you go further north it can take more sun, so a partial shade location can be used. At the top of its range it can usually take full sun but plant in a sheltered location to ensure winter survival.
Makes a great understory in woodland settings where it can be used as a focal point of the forest. In other shady locations it can be used to create a hedge or used along pathways, or as an accent plant. Takes pruning very well so can be pruned to shape or cut as a hedge. Be aware however that if pruning mistakes can take a very long time to grow back in.

While the plant is fairly hardy the new spring growth is frost tender so may need to protect it from late frosts if shoots are growing. Covering with a old sheet or tarpaulin is usually sufficient. If late frosts are common plant in a sheltered location to prevent regular shoot dieback.

Prefers a sandy well drained soil with some organic material. Cannot tolerate wet soils. Also prefers neutral to slightly acidic soils does not do as well in more alkaline or chalky soils. Care should be taken if growing around house foundations as these tend to be more alkaline due to the building materials.

Since they are so slow growing they also make excellent pot plants for accents outside the house, along driveways and other areas where potted, often shaped, plants are used. Ensure there are good drainage holes in the pot and a well draining soil mix is used. Keep watered to ensure they don't dry out entirely. In colder zones take pots into a unheated garage or shed for the winter to prevent pots from freezing.

Japanese Plum Yews are not heavy feeders so a yearly or twice yearly feeding should be sufficient. If planted in a forest setting no fertilizer should be needed.

Since Japanese Plum yews are very slow growing not much pruning is necessary. If it is necessary to do radical pruning it should be conducted during the later winter early spring before the new growth begins to emerge. Light pruning for shape can be completed at any time of the year. However take care when pruning as any mistakes will take a very long time to grow back in again. An excellent choice for topiary as slow growth ensure that the shape is kept for long periods without additional pruning.

Fruits are ripe in fall wait until they turn brow and slightly soft before picking for best results.

The fruits can be eaten raw or cooked. They are very sweet and juicy resembling a tiny plum ¾- 1 inch (2-3cm) long although an olive is more descriptive. The flesh is thick and soft and with a hint of pine flavor. Take care to pick only when ripe as fruits have a more resinous flavor if picked too soon. Very popular food in Japan could become a good potential fruit crop in future.

Plant contains many alkaloids and seeds have large number of diterpenes that possess high antimicrobial properties. Is being researched for use in treatment of myeloid leukemia. and lymphosarcoma.

Since the plant looks so much like a regular yew it was first considered as one and given the name Taxus harringtonii by Thomas Andrew Knight in 1839. However it has many properties that are not at all similar to regular yews, the most noticeable of which are the large fruits, but the chemical composition of the plant is very different. All regular yews are considered poisonous to humans but the Japanese Plum Yew is not. However deer which love to feed on regular yews regardless of what we consider poisons will not eat plum yews! Thus it was moved to its current genus and renamed Cephalotaxus drupacea by Philipp Franz von Siebold and Joseph Gerhard Zuccarini in 1846. This name comes from the Greek words kephale meaning "head" and Taxus meaning "yew" for its resemblance to yews (Genus Taxus). However this name removed the original name of the 'discoverer' the Earl of Harrington so it was changed again to Cephalotaxus harringtonia but this name to violates the grammar rules of Botanical Latin and in 2012 was corrected to Cephalotaxus harringtonii. However this final change has still not been universally accepted so Cephalotaxus harringtonia is still used for the most part until the botanists come to a conclusive decision.