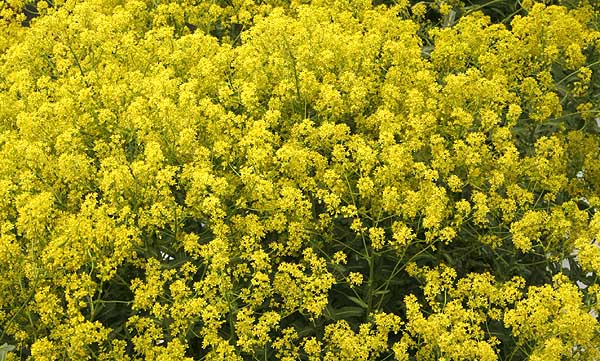 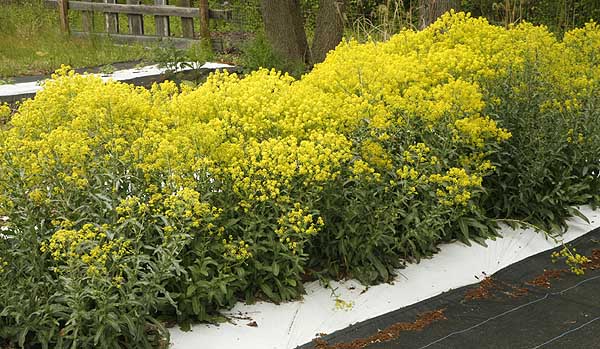 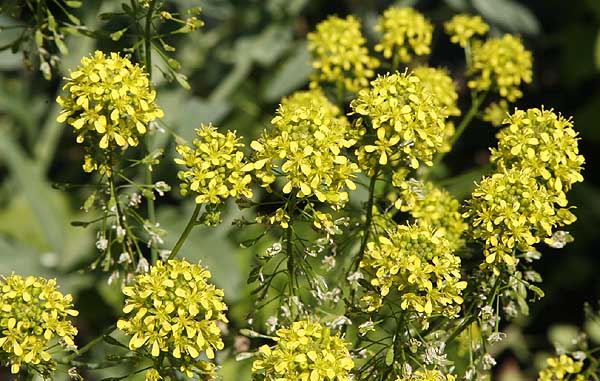 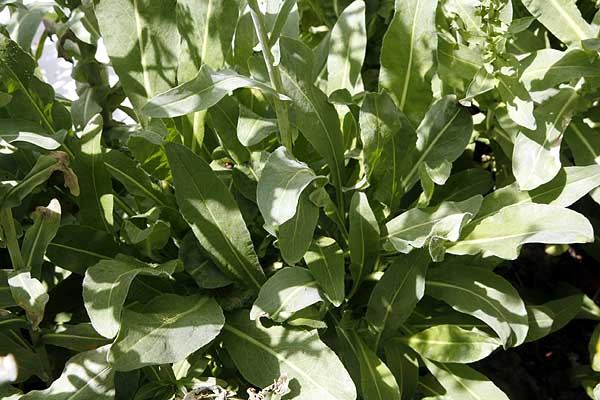 This plant will bring color and light to the early spring garden. It is a biannual and flowers in its second year usually in early to mid May bringing a lovely burst of color to the garden after the spring bulbs have done but the annuals and perennials have not swung into bloom yet. It is hardy to zone 6b and up to 6a or 5b with good mulching. It's an easy plant to grow and takes little care once planted. In many cases the plant will die after flowering so reseeding or allowing it to self seed a little is useful. However in many cases the plant will live up to five years before expiring. Rabbits and Deer don't seem to like it.

Description of Woad (Isatis tinctoria).
The plant starts out as a rosette of slightly blue green oblong to lance shaped leaves close to the ground. The leaves can be anywhere from one to seven inches long and up to 1 ½ inches wide. In early spring of the second year the plant sends strong stalks with smaller leaves along each branching stem. The stalks can reach up to 3 ½ feet tall, but most commonly are around 2 ½ feet. These many branched stems are topped by a multitude of small rounded clusters of bright yellow flowers. Each flower itself is tiny with four small petals and are arranged in small rounded racemes that form a large panicle that both native and honey bees adore. The flowers are produced in early to mid spring (early May in zone 6b) and last for several weeks. The flowers are followed by long seeds which turn black as they ripen. They tend to stay on the plant so cutting it down at this point will prevent the seeds from spreading. In most cases the plant dies after flowering but in some areas and soils it will continue on. However if you want to have flowers every year it best if you grow a few plants each year to keep the cycle going.

Growing Woad (Isatis tinctoria) from seed.
Woad is extremely easy to grow and germinates very quickly. It can be sown outdoors if desired after all danger of frost is past or it can be sown inside in later winter to early spring for a more robust start. Follow our general growing instructions for good growing and hardening off.

Location and Care of Woad (Isatis tinctoria).
Woad likes full sun and a well drained soil, otherwise its pretty easy to grow. It is hardy to zone 7 or 6b (-15°C or 5°F). Some sources state the woad likes an alkaline soil, while this may be true we grow it quite well on our slightly acidic soil. Woad is a member of the cabbage family and is susceptible to club root so it is recommended that when plants die off they new ones are planted in a slightly different location to ensure that the diseases does not take hold and the plants do not exhaust the soil. Don't plant them where other members of the cabbage family have been growing either. Since woad is grown mostly as an ornamental for its masses of bright flowers it is usually grown in groups or in flower borders so a rotation with cabbage is not such a problem.
Woad is a biannual - meaning it only lives for two years - and it flowers in its second year. However there are many reports of the plant flowering in the first year, and also of it living for more than two years. It all depends on its location and the soil type.

Advantages, Problems and diseases of Woad (Isatis tinctoria).
While woad may be susceptible to club root it is not as common as in other brassicas. In addition since the leaves contain different compounds they are not attacked by caterpillars and other pests that tend to decimate members of the cabbage family. Deer and rabbits don't eat it either.

Medicinal uses of Woad (Isatis tinctoria).
Woad has also been used for centuries as a medicinal herb. It has strong antibacterial properties. Traditional Chinese medicine has used the herb to treat a wide range of disorders including meningitis, encephalitis, mumps, influenza, erysipelas, heat rash, high fevers and convulsions. The whole plant appears to have anti cancer properties and very strong antibacterial properties. Both the leaves and the root are used most often in combination with other herbs to reduce the strong astringent qualities of woad.

Harvesting Woad (Isatis tinctoria).
Leaves can be cut from first year plants with snips or secateurs throughout the growing season. First frosts tend to destroy the color but those in warmer states may obtain color all year around. Some leaves can be cut early in the second year but there are few leaves once the plant begins to flower. Don't over harvest the leaves always make sure there is enough left for the plant to regenerate new ones.

Other info
Woad is a native to Europe and is most commonly known for the blue dye that can be extracted from the leaves - fresh young leaves are best. In ancient times the Celts used it to paint their bodies blue to frighten their enemies in battle. If growing plants to harvest the dye make sure you give the plants plenty of nitrogen to increase leaf growth.

Caution: In many western states woad is considered as an invasive weed so should be grown with care.