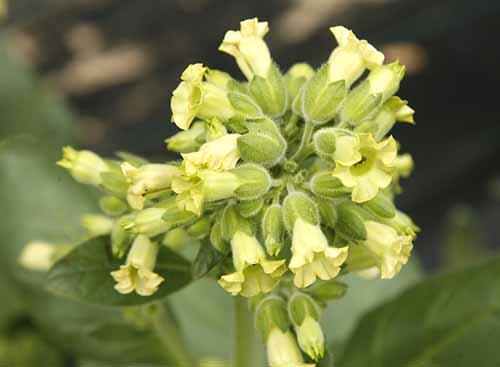 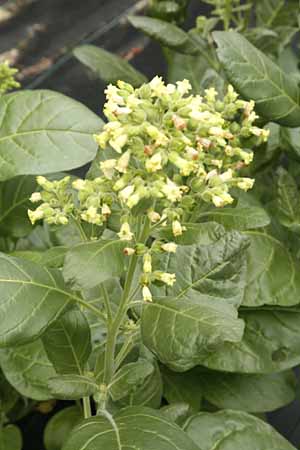 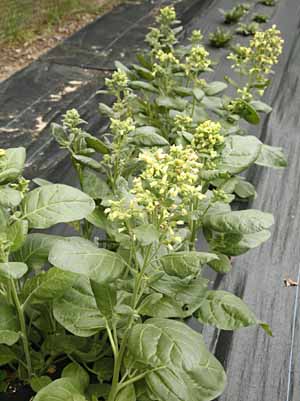 This is a very interesting plant that will bring color to any garden. This native annual will spread out and cover quite a bit of ground offering up copious quantities of yellow flowers from mid spring until the frost knocks it back. Its not too fussy about what kind of soil it grows on and it flowers for long periods of time. It prefers full sun but will grow in areas were there is some shade or at least not full sun all day. Due to the high nicotine content almost all animals and insects leave it alone, so its deer and rabbit proof. Once planted it does not need much attention but will need some water and is not drought tolerant.

Description. A somewhat bushy annual in some warmer zones it can act as a short lived perennial. The leaves are broadly ovate to elliptic light to mid green in color and can be as much as 6 inches long and almost as broad. The leaves are soft with a pleasant feel to them. The flowers borne on wide branching stems in large clusters or panicle like inflorescences. T The flowers themselves are tubular urn shaped widening at the end with a ruffle of petals each being about ¾ inch long, with a sweet scent. The flowers are followed by spherical seed capsules that spilt into four sections to release the seed.

Growing.
Seeds must be surface sown as they need light to germinate. The seeds usually germinate within about 10-20 days at 70 degrees. Sow early and transplant when danger of frost has passed. Sowing later will produce smaller plants with not as many leaves. Some sources say that transplanting can cause problems with the taproots but we have not run across this problem on our farm. Growing on in individual pots before transplanting out does give the largest plant that flower for the longest time. We have plants flowering in early to mid spring and still going strong when the frost knocks them down in November.

Location and Care.
Rustic tobacco likes full sun thought it will do quite well in with some morning or afternoon shade. It likes a well drained soil and needs to be watered to get good flowers and leaves. Adding organic material to the soil will help a great deal. Fertilize several times during the year to ensure continuous plant growth. If growing for the leaves use a higher nitrogen fertilizer and side dress the plants during the summer months. IF the flowers are more desirable then a general fertilizer is best. Rustic tobacco cannot tolerate drought for any length of time so water is needed on a continuous basis, a trickle or soaker hose works well. With a small amount of water on a daily basis the plants will flower throughout the summer in zone 6.

History. Rustic tobacco is considered as a sacred plant by almost all Native American tribes that were able to grow this plant from the Amazon forests to the prairies. Archeological research has found evidence of the plants use several thousand years ago. This plant was prized because it has the highest content of nicotine of any tobacco more than 10 times that of commercial tobacco (Nicotiana tabacum). Plants grown in rain forest areas can achieve up to 20 times the amount of nicotine. For this reason it was considered an important hallucinogenic entheogen and was used ritually and by shamans in most American tribes. Smoking for important rituals and peace ceremonies was one of the main uses but it was also used medicinally for many different maladies amongst the American tribes

Caution. This plant is considered extremely toxic due to the high nicotine content. It should not be eaten. However it can safely be grown as an ornamental since the leaves are bitter its not a tempting plant for anyone to chew on. Smoking it can be very addictive. Commercially these leaves are always blended with other tobacco varieties or different plants entirely to reduce the nicotine content.

Medicinal. The native Americans utilized the plant a lot as a medicine and there are long lists of what the plant was used for, but most especially for parasites, kidney problems, snake bites, as an analgesic to relive pain especially toothache as a poultice for insect bites, stings and boils, to treat colic. Lockjaw and black-yellow disease. Today its mainly used in research to determine ways to counteract the high nicotine content.

Because of the high nicotine contents the leaves are used to make insecticide either from a 'tea' of the leaves or an extract. Few if any insects attack the plant making it an easy maintenance plant.