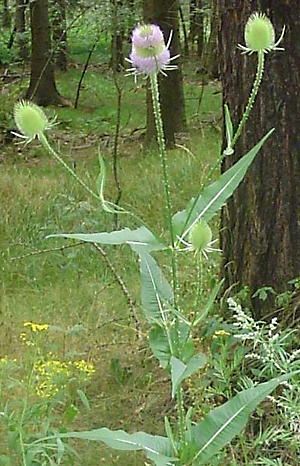 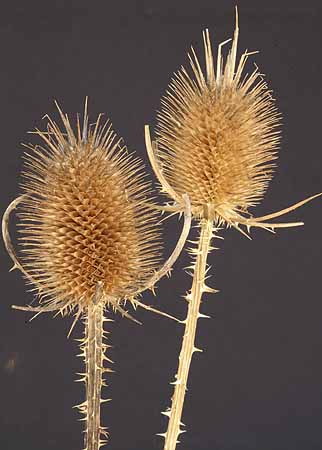 Nothing looks like a teasel. It's a very dramatic plant to have in the back border or any sunny spot where a tall plant with drama is needed. Growing from four up to eight feet tall in good soil and needing very little water teasels make an interesting talking point in any sunny garden. Once established they need very little care and deer don't eat them. They are very popular with bees, birds and hummingbirds who love the flowers and seeds. Deer don't eat them.

All teasels are biennial - meaning they flower in the second year- In the first year the plant produces a basal rosette of prickly of broadly lanceolate mid green leaves up to twelve inches long. The leaves are very spiny with a row of large spines on the underside of each midrib. Rosettes are usually fairly flat to the ground but leaves may stand proud several inches. In the second year the leaves increase in size up to 15 inches in length and the plant sends up a very tall flower spike with leaves arranged in pairs on the stems forming little cups around the stems which collect water. This is thought to be a trap to prevent insects from crawling up. Both the leaves and stems are very spiny. The stems branch out to form a large plant with each stem ending in a single large flower spike. Each flower head is basically stiff cylindrical shape up to four inches or more tall made up of a mass of tiny flowers with lavender, lilac, pink or sometimes white flowers. The flower head tends to bloom in bands of flowers up the stiff flower head from bottom to top beginning in early to mid summer and lasting for about a month. The stiff heads then last and will overwinter even though the plant is dead. This can offer winter interest in an otherwise barren landscape. The flower heads have stiff arching spines protruding from the base of the flower and curving up and sometimes over the flower head depending on the species.

Care and positioning.
Teasels will grow on most soil types but don't like wet poorly drained soils. They need full sun to flourish but will grow on woodland edges. Once established they need very little additional water and are very drought tolerant, more so in the second than first year. If you want to keep a patch of teasels going leave the seed heads on to allow new plants to form around the bases of the old ones. Be aware that birds love the seeds and may spread them further in the garden so some weeding may be needed.

Considerations.
In some parts of the United states some teasel species are now considered a invasive species. This generally refers to the cut leafed teasel with some consideration for the common teasel. The cut leafed teasel can be recognized by it's greatly indented leafs which have ‘cuts’ right down to the midrib. The flowers on the cut leaf tend to be white while in most other species they are lavender, lilac or pink. The spines on the bottom of the flower head tend to be short and do not curve up around the flower head as in Fullers teasels.
Fullers teasel has much larger flower heads than most other teasels. However if grown in poor soil with low water the flower heads will be smaller and more difficult to identify just by size. Fullers teasel does not spread rapidly as other teasels it will increase it's range ignored but with a little care it can be kept well contained and very few patches of this plant are found in the wild, and when they are they tend to be small patches with long distances between each.

Growing.
From seed. This plant is easy to grow. The seeds can be directly sown in the ground in early spring or started indoors. We recommend indoors since the seeds are a favorite of many birds they do tend to dig them up. We have even had voles and rabbits dig them up!

Uses.
Seed heads are wonderful in dried flower arrangements. The large prickly heads can also be used for many craft projects. Fullers teasel was originally grown to be u ed in the wool industry. This species has large backcurving spines on the seed head that were used to bring up the knap in woolen cloth and in some cases card wool. This is one of the only plants that is used in it's natural state as a tool. It is still grown in Europe mainly England and Netherlands for this purpose. A dye is also made from the plant again used in the wool industry.