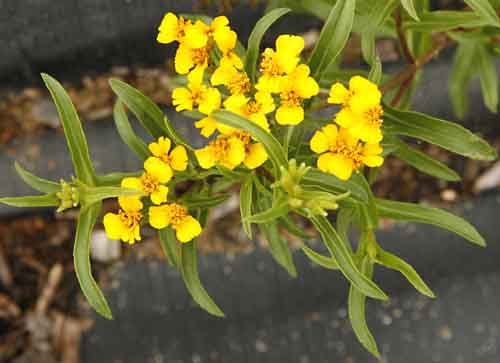 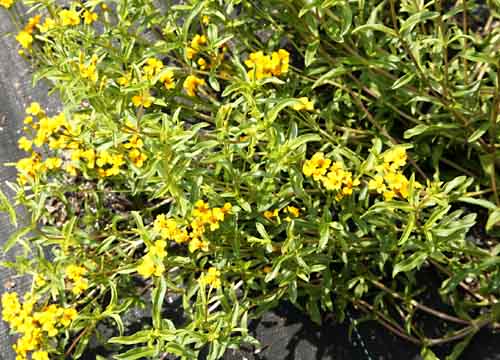 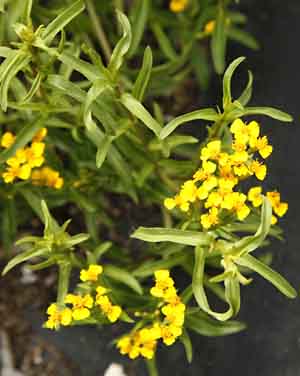 A lovely cheerful very aromatic plant for hot sunny areas. Grown as a annual in zones 7 and above and a tender perennial zone 8-11. In most cases it produces a lowish growing shrub like herb about 12 " high with bright yellow flowers from mid summer that will persist until the frost. Its fairly drought tolerant and the strong anise licorice aroma sends a wonderful scent across the garden. Use for low borders sunny pots and rockery areas. The strong flavor keeps the deer and rabbits away while giving bright color to the garden all summer long. Its also a great substitute for French tarragon and great in salads.

Description
A perennial to zone 8 Mexican Tarragon is usually grown as an annual in higher zone numbers. Descriptions of this plant seem to vary across the internet, perhaps it depends on what zone its grown in.
Here in zone 6b Mexican Tarragon grows as an annual. It produces mid green stemless oblong leaves that are finely serrated at the edges and somewhat shiny and arranged in opposite pairs on stiff semi woody stems. The stems are much branched and tend to flop over sprawling along the ground. For this reason most of the branches tend to be on one side of the plant which then reach upright to about 12 inches. At the tops of these branches it produces small clusters of yellow flowers. Each flower is about 0.5" across (1.3cm) with 3-5 florets that are very similar to many marigolds. In one year it can produce a very large semi shrubby plant that is highly aromatic just to touch. It begins to flower in mid summer and continues through until the frost knocks it back.

In zones where it over winters it apparently produces a woody sub shrub that has upright branches up to 30" (76cm) high, although others report it grows to 4 feet?. Wikipedia claims the stems are unbranched but I cant see this and in fact the photo they show along with the description shows branched stems. In most cases a freeze will kill the plant to the ground but it will come back up. Longer freezes and cold winters will kill the whole plant.

Location and Care.
Mexican Tarragon needs full sun and a well drained soil to prosper. It can take a little light shade but wont do as well. It can grow on most soil types provided that they drain well and cannot tolerate wet soils. Poor soil is just fine but adding a little organic material will provide a stronger plant. It's a fairly drought tolerant plant and does not need too much watering once established, however it will grow more lushly and produce more leaves for harvesting with some water. A soaker hose around the roots is an excellent way to water these plants.

Zones 8-11 should have no problem overwintering Mexican Tarragon. IN zone 7 a heavy mulch around the plants may help the roots to survive the winter. The plant will most likely die back to the ground but it should survive through until spring unless it's a particularly cold winter.
The roots are fairly tough. Here in zone 6 (now 6b with the new mapping) we dig our Mexican Tarragon plants out and pot them every year then we place the pots in an unheated poly house. This prevents the pots from freezing over the winter but does not stop them from getting cold. All but one of our plants survived the long cold winter of 2010 although the 6 foot snow blanket that built up around the poly house most likely helped keep them warm. If you want to keep your plants alive dig them up and put them in the garage over the winter. The tops will die back but the roots should be fine and you wont have to start from seed every year. Make sure you dig the plants out before the first killing frost.

Growing.
Mexican Tarragon grows easily from seed and will flower well in the first year. Germination is usually rapid it can be anything from 5-12 days. Sow in individual cell trays or flats at least a month before the last frost date. Transplant to larger individual pots when large enough to handle. Harden off in a shady area before planting out after all danger of frost has passed. Space plants at least 8-12" apart.

Harvesting.
Harvest the flowers as they appear for use in salads or dyes. Leaves can be harvested individually if desired, take the tops off the branches to encourage more branching. For full harvest snip branches from the main stem at the end of the season bunch and hang to dry in a warm dark area. Strip the leaves from the stems and store in airtight dark containers for later use.
In areas with a long growing season leaves and branches can be harvested continuously as the plant grows fairly rapidly. In colder areas cut most of the branches back to ground level and leave just one or two about a foot in length before the frost hits. Mulch or dig to preserve over winter (see care above)

Culinary Uses
Mexican Tarragon is often used as a substitute for French Tarragon especially when it is needed fresh in climates that are too hot for French tarragon to grow. The flavor is a little stronger than French and has a more anise flavor but its also sweeter which makes it especially good for rice and desert dishes. It can be used in soups, stews, sauces. It is an important flavoring of 'chocolatl', the foaming cocoa-based drink of the Aztecs and still sold in many south American countries. The flavor is an important component in remoulade, tartar and bearnaise sauces, and in French salad dressing. The leaves also make a pleasant anise-flavored tea. The flowers can be added to salads to give flavor and color, they can also be used to color rice dishes. They can also be sugarized and used as cake decorations.

Medical uses.
Mexican Tarragon has been used for centuries by the Aztecs to relieve digestive problems including diarrhea, nausea, indigestion, colic. It is also used for malaria and feverish illnesses and is reputed to revitalize the body from a hangover. In stronger doses depresses the central nervous system and produces an anesthetic and hallucinogenic effect. In large doses it can produce a state of euphoria and was mixed with a form of wild tobacco by Huichol Indians to create a psychotropic result. It was used in many sacred ceremonies of the Aztecs for this purpose. There are also many reports of its effective use as an aphrodisiac. The early Spanish colonials used it to treat the clinically insane
Externally it is used to treat eczema, scorpion bites and to remove ticks. Applied topically it is an effective insect repellent.
Modern research has shown that when combined with UV rays, Tagetes may have a hindering effect on E.coli and Staph cultures.

Warning. High doses of Mexican Tarragon function as a strong hallucinogen. Use caution.

Other uses.
Root secretions are an e insecticidal effect that has proven effective against nematodes and to some extent against keeled slugs, it also repels some pests such as asparagus beetle and bean weevils so works well as a companion planting. For this reason the plant is often burnt to repel insects.