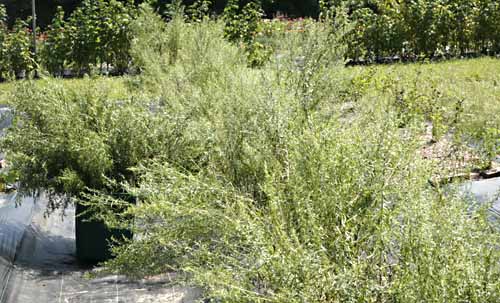 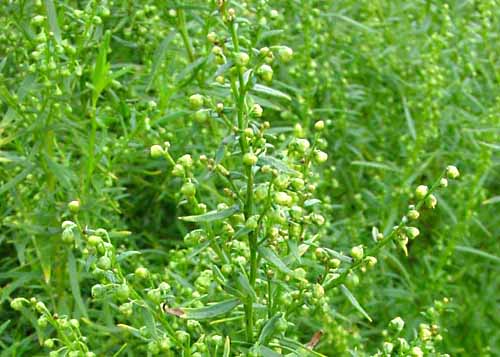 Russian Tarragon is a tough hardy perennial plant that grows to about 3-4 feet in height. It takes very little care once established and can tolerate drought reasonably well. IT will produce much lusher foliage with some water but is not very particular about soil type and in fact does much better on poor soil than rich ones. Hardy to zone 4 (some say 3) it returns every year with foliage that increases in aroma as the year goes by. Deer and rabbits don't eat it, and insects don't really like it making it an excellent choice for around outdoor gathering areas. It prefers full sun, with some shade in hotter zone. The dense branching foliage makes a good annual hedge.

Description
A hardy perennial herb with shrub like growth that dies down in winter in cooler areas. The first shoots appear in early spring and quickly give rise to tall slender stems that can grow to 3-4 feet in height. The leaves are long and narrow (linear) and 1-4" long, new leaves are bright green in color fading to a duller green as they mature. Leaves are arranged alternately on the stem and are very numerous borne singly at the top of the plant and in groups of three below. The flowers appear in late summer at all along the tops of the upper branches in loose panicles and resemble small yellowish green globes. The flowers do not often open and often are sterile, seed production is scarce. The leaves have a distinctive aroma. In colder zones the plant will die down in winter.

Aroma
Tarragon leaves have a distinct aroma often described as slightly anise-cinnamon spicy. The aroma of the leaves is barely noticeable when young but develops more as the plant matures and intensifies as the plant 'flowers'. However the full aroma does not appear until after the plant has been harvested and dried when the oils are concentrated and the plant gets its full rich scent.

Varieties.
There are two main varieties of Tarragon, French and Russian. French tarragon can only be propagated from root division and needs to be purchase from a reputable dealer as small plants. The plant is a lot more tender and fussy than its Russian counterpart. Russian tarragon can be raised from seed quite easily. It's a much tougher plant and needs a lot less care. Most sources insist that there is little aroma on Russian tarragon and only French can be used. We have grown both types on our farm and after much sniffing and tasting (of both dried and fresh herb) can't tell to much difference between them. It may be that we have a particularly good strain of Russian Tarragon or it could be that the French Tarragon cuttings we were sold were not really French Tarragon. They did not survive the winter while the Russian did, but that may not be a true test.
If you live in a colder zone (7 and above) growing French tarragon is going to be hard and plants will need to be brought in during winter months. Zone 7 might just might get away with mulching heavily in winter provided the temperatures don't drop to much. Frost can damage roots and plants can die. For outdoor use growing above zone 8 is not going to be easy, it can be done but it takes a lot of work.
Russian tarragon is a tough plant. It grows well for us here in zone 6 with little care and it taste just fine to us.
I am sure that connoisseur could taste the difference but for our purposes its fine.

Location and care of Russian Tarragon.
These note do not apply to French tarragon which needs a lot more care and attention.
Russian tarragon is a tough plant that dies down in winter to a hardy rootstock. It prefers to live on fairly poorish soil and produces it best flavor in such areas. If given too much organic matter it will reduce its aroma.
In zone 6 we give it mostly full sun with a little afternoon shade in lower zones slightly more shade during the heat of the day would be appropriate while higher zones (5 and above) full sun all day would be ideal.
It needs a well drained soil, the roots don't like to be waterlogged even for a short period of time. Once established it is fairly drought tolerant plant and does not need much extra water. However if growing with the intent of harvesting rather than for decorative purposes adding some water is recommended. Unwatered plants tend to be shorter and not as aromatic.

The best method is to place a soaker hose around the base of the plant and cover with mulch such as wood chips, don't use grass cuttings they are too compacting. Water for about 15 -30 minutes per day depending on how much water your hose gives out. The mulch ensures that the water stays near the ground and does not evaporate and allows for a much smaller water use. Plastic mulch sheeting can also be used as it keeps weeds down and allows the soil to stay moist, however it might be slightly unsightly in a small herb garden.
Russian Tarragon needs very little other care. Once established with a little water it can be grown and forgotten.
Cut down the stems at the end of the year and mulch over the root crowns in colder zone to help protect in winter. If using black plastic mulch this is not necessary. The plant makes a nice back border plant or even a short summer hedge plant.
The oils and aroma of tarragon are repellant to many insects so this plant is an excellent choice for around patios and other outdoor gathering spots.

Growing Russian Tarragon
Start indoors in late winter in seed trays or plug cells. Use good light seed starting mix and cover lightly. For more details see our general growing instructions. Transplant when seedlings are large enough to handle into individual pots. Grow on until at least 6" tall before hardening off and planting out. Plant at least 12" apart.

Harvesting
It is best to harvest tarragon plants just before they start flowering, as this is the time when they possess maximum essence and therapeutic value. While harvesting the plant, it is important to leave one inch of the stem from the ground to enable new shoots to grow from of the stem. Cut whole stems and tie in bunches hang upside down in warm dark area with good air circulation until dry. Do not place in sunshine or leaves will bleach and loose their essential compounds.
Dried tarragon has a much stronger flavour and aroma than fresh as the drying concentrates the essential oils. Fresh tarragon can be preserved by freezing either alone or in ice cubes for instant use.
Once bunches are dried the leaves can be stripped from the stems and stored in air tight containers ready for use.

Caution. Some people find they develop breathing difficulties and coughing when stripping dried tarragon leaves due to the strong aroma. It is suggested that a mask be worn to complete this task.

Edible Uses
The leaves are used Fresh they can be used in salads. Cooked they are used in a huge variety of dishes to add flavouring. They are especially good with oily foods as the have a beneficial effect on the digestive system. Use in soups, stews, roasts and sauces especially hollandaise, Béarnaise and tartare sauces. Young shoots can be cooked and used as a potherb. The leaves are also used to flavor vinegar and making vinaigrettes salad dressings. Tarragon is also used extensively for accompaniment with fish and eggs and used quite often in quiche. It is also added to butter which is then used as a flavoring.

Medicinal Uses
Tarragon is a warming herb that will stimulate the digestive system and uterus. It will help to destroy intestinal worms and lower fevers. The leaves are also diuretic. An infusion is used in the treatment of indigestion, flatulence, nausea and hiccups. It also has mild sedative effects and can be used as a sleep aid. A poultice can be used to relieve rheumatism, gout, arthritis and toothache. The essential oil is used in aromatherapy to treat digestive and menstrual problems.

Other Uses
The leaves contain about 0.3% essential oil, about 70% of which is methyl chivacol which is used as a food flavouring. This oil is also repellant to most insects so it can be used as such. The growing plants and dried also repel insects.