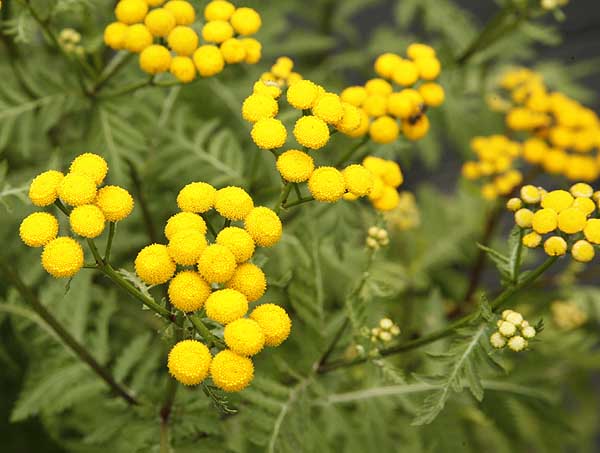 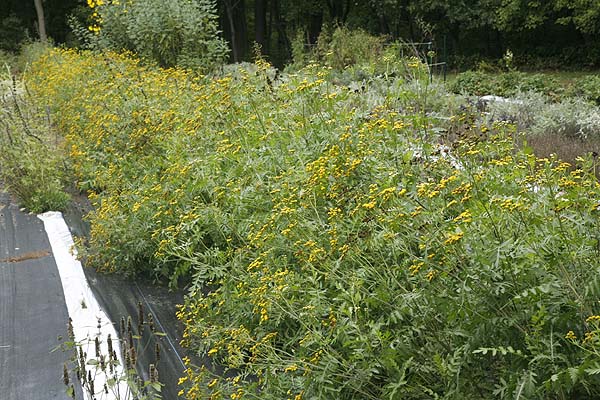 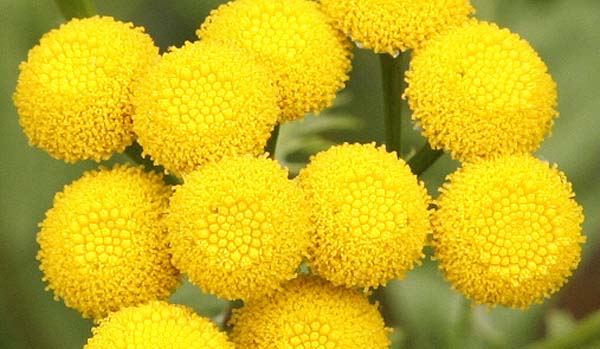 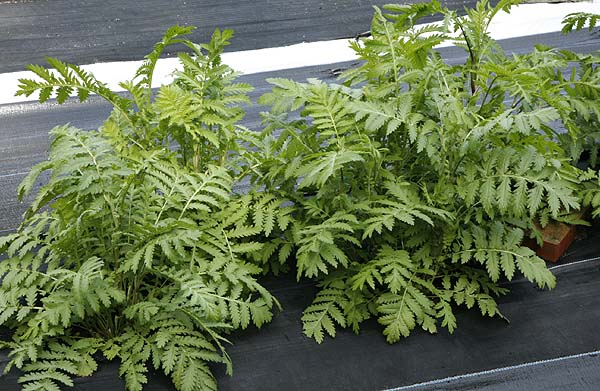 Delightful perennial plant which once established needs little care or water. It needs either full sun or partial shade to florish but will grow on almost any soil type. Will thrive in hot dry areas will no care. The bright yellow flowers begin in mid summer and continue right up until the frost. The plants are dark green and bushy and will fill out any area of the garden very well. Planted in a group they will produce color for a lot of the season. If flower heads are removed blooming will continue for a long time. No need to buy mums to brighten the garden in fall when you have tansy bushes! It has a interesting strong aroma and deer really don't seem to like it. Pick and dry the flower stems for later use in the house, they keep their color very well.

Description.
A stout busy plant growing about 3 feet tall - possibly 5 feet in shady areas where it will be more lanky. It has long fern like stemless mid green leaves up to seven inches long. Arranged alturnately on stiff erect somewhat reddish stems they reduce in size towards the top of the stem. The plant branches from the base producing a bushy plant in many ways just like a chrysanthemum but with stiffer stronger stems. Flowers are produced in flat clusters up to eight inches across at the tops of the stems. They are small - about half an inch wide - roundish flat topped button like bright yellow in color. Tansy can produce many of these at one time providing a lovely show of bright yellow blooms floating over green foliage all summer long.
The leaves and flowers have a strong scent. It has often been described as "camphor with hints of rosemary" but personally I think that’s being extremely kind. It has a scent all it's own which is very high in volatile oils which has made it a valuable oil plant.
Tansy plants are extremely long lived. Once established they can survive for decades. The name Tansy is a corruption of the Greek word for immortality - athanasia.

Location and care.
Once established Tansy will take care of itself. It will grow in almost any soil type even gravel with some organic matter in it. It prefers full sun and is quite happy in hot dry areas. It also resists frost and cold well so it's just about perfect for any garden. It needs little or no watering, but would benefit from some water in times of high drought if you want the flowers to continue.
The roots of the tansy plant are fairly close to the surface and it may spread out creating larger patches although this is uncommon. Be aware that tansy can grow from a small piece of root so make sure if you are clearing roots that you remove all the unwanted pieces and don't throw them in another part of the garden where you don't want tansy to grow. It will self sow from seed but seeds to not fly that well and seedlings are relatively easy to remove.

Growing
Growing Tansy from seed is very easy. Seeds can be sown directly in the ground, but they are very small so it's better to start them inside and plant out later. Allow plenty of room for your plants to grow. It is a perennial and will be there a long time.

Uses.
Tansy is an extremely useful plant and has an amazing number of uses. Because of its strong smell, tansy is a natural insect repellent. From the middle ages it has been scattered across floors to keep pests away. It can be used as a natural moth repellent. Hang bunches in closets, pack in boxes with stored clothing or hang up dried bunches to repel moths. Scatter dried power in carpets to get rid of fleas. In olden days it was also used in mattresses and between sheets to discourage lice, and maybe bedbugs?

There are numerable medicinal uses for Tansy. It's main use was to expel intestinal worms and to help stimulate menstrual bleeding as well as it's use as a calmative to aid digestion. A tea from the leaves was once commonly taken for colds, stomachaches, and intestinal worms. Folk healers also made a poultice from the leaves to place on cuts and bruises.

Edibility.
The young leaves are edible either raw or cooked, they can be used in salads or a substitute for nutmeg and cinnamon although it has it's own unique flavor. In England, the leaves were once used to flavor small tansy cakes eaten during Lent - their bitter taste symbolized Christ's suffering.
Too much tansy however can be toxic. The exact amounts are undetermined, although many herbalists still use this plant others are less sure some claim that even external application of tansy preparations carries the risk of toxicity, although the records of this are sketchy at best and appears to be perpetuated hearsay rather than solid fact.