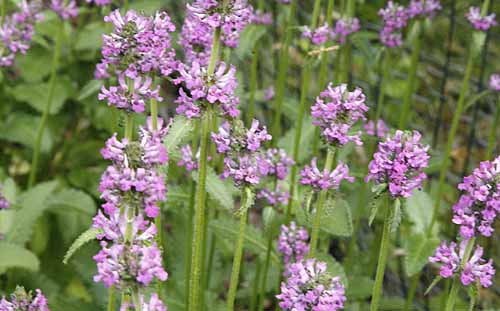 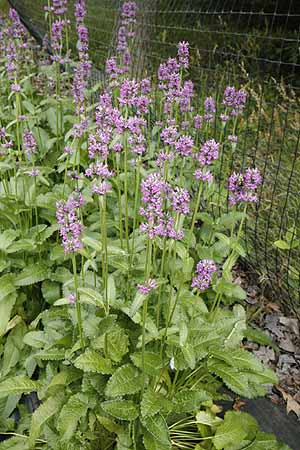 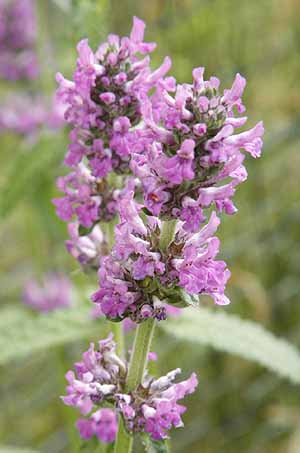 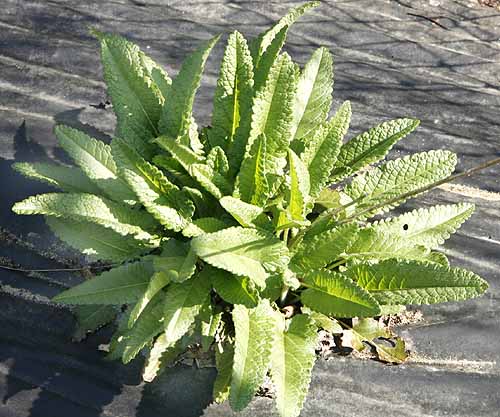 Wood betony is a wonderful perennial plant for shady areas. It will happily grow under deciduous trees, around tree lines and north sides of buildings. Anywhere there is shade. It does need some light so avoid extremely dense shade, it will also not grow under coniferous trees. Prefers cooler areas and is very tough. Hardy to zone 4 but not recommended below zone 8 due to the heat. Not fussy about soil type as long as not waterlogged. Easy to grow with attractive mid green leaves in rosettes and showy spikes of purple flowers in summertime when little else will flower under trees. Will make a great summer ground cover in shady areas with little maintenance. Leaf litter can be left around plants as mulch which reduces raking. Needs some water in dryer areas as little will reach under leaf canopy even if there is some rain. Wildlife may eat it but butterflies and beneficial insects love the flowers.

Description of Wood Betony (Stachys officinalis).
Wood Betony is a hardy perennial herb hardy to zone 4. In early spring it produces a rosette of mid green leaves which are shaped like long drawn-out hearts up to seven inches long with long thin stiff stalks. Leaves are deeply veined making them strongly textured with strongly scalloped edges and covered with fine hairs. In mid to late spring strong stiff square stems arise from the center of the leaf cluster to the height of about 24 - 20 inches. They bear at wide intervals a pair of leaves identical to those in the basal cluster expect being much smaller. The top of the stem bears a spike of purple flowers arranged in dense rings or whorls that bloom from late spring and early summer and last about two months. Each flower is a tube ending in two lips, the upper is slightly arched and the lower one flat with three lobes with four stamens close to the tube opening and arching up to the upper lip. Flowers are followed by small brown seeds that fall easily from the spike.

Location and Care
Wood betony is a wonderful shade plant. It will grow in fully shaded positions under deciduous trees, NOT conifers. Does not like high heat so ensure is well shaded in zones 7-8. Not recommended below zone 8. Prefers a good soil with rich loam, and is happy growing in leaf litter. Soil needs to be well drained cannot tolerate waterlogged soil. Prefers a little light rather than total dense shade but it great under trees and even in woodlands provided that the canopy is not fully dense. Some water is best since its usually growing under trees and will need to compete for water.
Plant at about 12" intervals and it will produce a good total ground cover in about two years. Weeding will be necessary until plants are established and any persistent perennials will need to be removed. Some water is recommended even in areas with high rain since most will not reach the plants under trees.

Can also be grown on woodland edges but does not take full sun well, needs shade at least half the day and never full noon sunshine. Once established needs very little care. Leaf litter can be left around plants in winter to help keep the roots protected if desired. Just ensure leaf litter is not too dense so plants cant push through in spring. If leaves are removed ensure mulch is added back in spring when the plants begin to grow to ensure enough food for the growing plants.
Little maintenance is needed, may want to cut down flower stalks in fall, or can be left for winter interest.

Growing Wood Betony (Stachys officinalis) from Seed.
Seeds need a period of cold before they will germinate well. All our seeds have been cold treated before shipping. They also prefer some light to germinate so sow on the surface of the soil or at most very lightly cover them. Germination can be erratic so sow in small pots or individual cell trays for best results. Sow indoors in mid to later winter and keep seed trays modestly warm but not hot. Do not use bottom heat, this plant prefers cool temperatures.
Transplant seedlings as they grow large enough to handle. Grow on in small pots until large enough to harden off outside. Plants grow slowly for the first year and take some time to establish so it may be late summer or early fall of first year before they are large enough to set out. Plant out at about 12" intervals and keep watered while plants establish themselves. Will flower in second year from seed.

Seed can also be sown directly on the ground in fall or early spring, however since germination is erratic we do not recommend this method.

Harvesting Wood Betony (Stachys officinalis)
Do not harvest plant until well established. Never attempt harvest in the first year from seed. Leaves can be harvested from early flower bloom until flowers are almost finished. Flower stalks should be harvested when about half the flowers are in bloom. Leave at least one third of the leaves and some flowers to ensure the plant can replenish itself for the next growing season.

Medical uses of Wood Betony (Stachys officinalis).
Wood Betony was once one of the most revered of herbal medicines and was widely used for a large number of complaints. During the middle ages is was considered to be the golden gem amongst herbs. Today it is much less used and then usually in combination with other herbs. The leaves are used as a tincture to treat migraine headaches, chronic and acute pain mostly in combination with other nervines. It is also used to stimulate the digestive system and liver and as an overall tonic for the body. It is also used for 'frayed nerves', pre-menstrual complaints, poor memory and tension, sore throats caused by allergies or colds, heartburn, and inflammation due to infections of the urinary tract. Powdered leaves if inhaled will cause violent sneezing and it has been used as part of a herbal snuff mixture in the treatment of headaches.

Edible Uses
Can be used as a substitute for black tea, infusion resembles taste and is caffeine free.

Other uses
A fine yellow dye is obtained from the leaves. Flowers can be dried and used in displays.

Magical uses Wood Betony (Stachys officinalis).
Apparently Wood betony was once used as a powerful herb against evil. Druids and other pagan religious use it for purification, protection, and the expulsion of evil spirits, nightmares, and despair. It can be added to bonfires at midsummer to help ward off evil spirits.

Name Confusion.
Unfortunately common names are often used for more than one plant and Wood betony is an excellent example. In most places the name wood betony means Stachys officinalis which is a native or Europe and has been used for centuries as a medicinal herb. However there is also a Native American plant Pedicularis canadensis that in some places is also known by the common name of wood betony. It bears no little resemblance to true wood betony having yellow flowers and growing in sunshine with more fern like leaves than true wood betony. This plants other common name is Lousewort which is a far better description since there are a fair number of plants in the lousewort family and a couple do look more like wood betony in that they have purple flowers. This produces more confusion and the common name of lousewort is sometimes transferred to true betony and used there also.