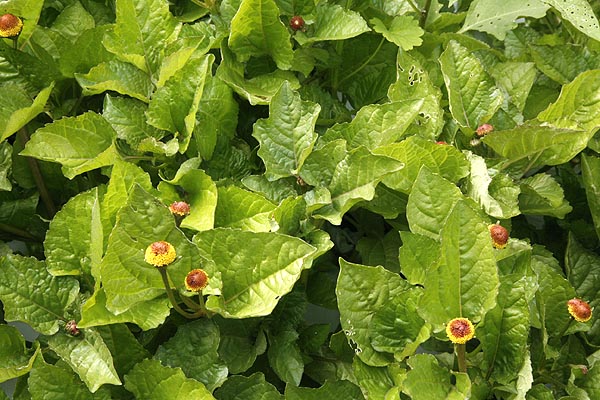 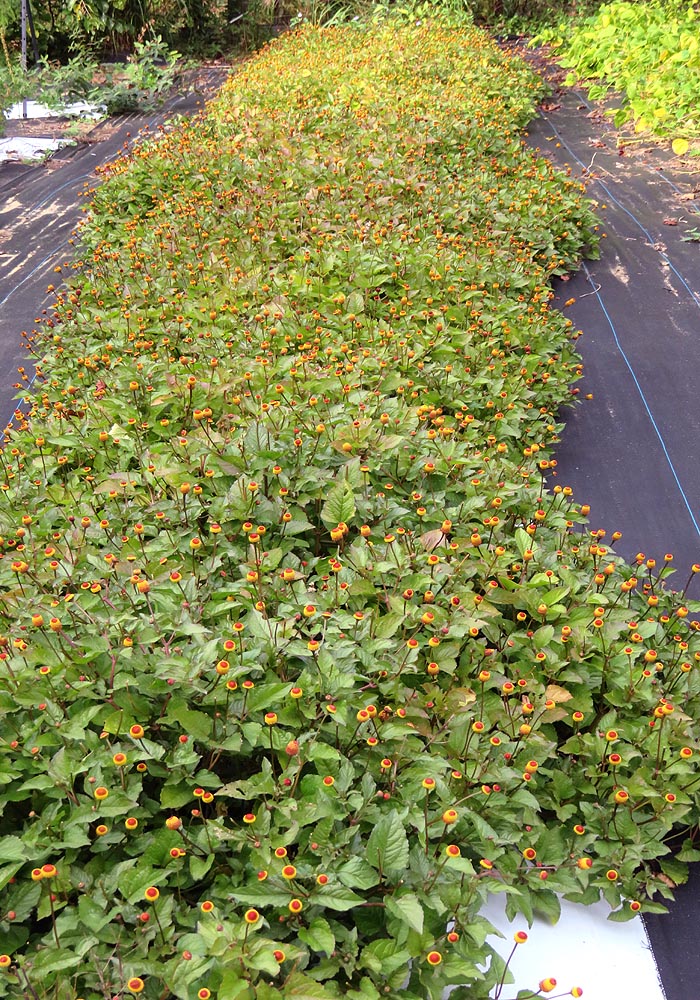 This is one of the herbs that no garden should be without. It has amazing properties as well as being a really interesting plant visually which makes it a great conversation piece. Spilanthes contains a compound called Spilanthol which when chewed works like an anesthetic/analgesic turning the mouth numb. If rubbed on the skin that will go numb too for short periods. Research has found it effective against many blood borne parasites such as lyme disease and malaria. Added to foods it can give a what some call a pleasant 'buzz' and is popular in some exotic cocktails. The plant is mostly tropical but is easy to grow as an annual almost anywhere, it will behave as a perennial in warm zones. Needs a sunny location, adequate water and richer soils to do well, given this it will spread out in a low growing bushy shape to cover the ground and produce really interesting flowers that look like eyeballs on sticks. Great conversation piece and ideal plant for Halloween.

Description of Spilanthes (Acmella oleracea).
A perennial plant that is grown mostly as an annual in colder zones. It has mid to dark green leaves that are darker on the top surface and lighter beneath. They are cordate shaped (sort of egg shaped) with wavy slightly serrated edges and puckered veins. Plants start small but bush out rapidly during the year and will easily cover the ground in a carpet. Grows to about 12-15 inches (30-38 cm) tall and can spread to 30 inches (76 cm) or more. Begins flowering very early with individual flower stalks rising above the leaves begins as a dark red button the stem but gradually elongates showing a bright yellow outer ring of florets the flowers lack petals entirely so its basically the center of a flower alone which looks just like an eyeball. Flowers can reach ½ inch (1.2 cm) in diameter and 1 inch (2.5 cm) long. Flowers grow more prolific during the high summer months tapering off towards late fall but still flowering until killed by frost.
Growing Spilanthes (Acmella oleracea) from Seed.
Very easy plant to grow from seed. However seeds need light to germinate so do not cover. If you remember this then success is mostly assured. In colder climates is best to start seeds indoors to give them a good start and ensure good robust plants for the growing season. For those in warm zones 8b and more sowing outdoors may be easier as the plant will act as a perennial. For more on growing see our general growing instructions. Use a good potting mix with plenty of organic material as they plant likes richer soils. Needs warm soil and moisture to germinate well colder conditions will reduce germination too much water can rot the tiny seeds.

Keep seed trays moist but not wet when sown. Seedlings grow rapidly so transfer into larger pots to grow on before danger of frost has past and they can be transplanted to the ground. Keep well fed and watered until transplanting.

Location and Care of Spilanthes (Acmella oleracea).
Spilanthes likes sunshine so plant in full sun in all but tropical zones where it will need some shade to ensure that it does not dry out too much. In most places it can tolerate partial shade for part of the day but anything less and it wont be happy. Its more of a fussy plant than many and needs good water and lots of organic material in a well drained soil to be at its best. Given these conditions it will grow prolifically throughout the season providing multitudes of its curious flowers. Picking the flowers helps to stimulate more production.
If growing in the ground using a soaker hose along a row of them and watering for a several minutes each day will keep them in their best condition. Add organic material to the soil before planting and feed with good all purpose fertilizer during the year for best lush results.
Spilanthes is good in a pot or planter on decks and even as a houseplant. The strange looking flowers can be a great conversation piece.
Harvesting Spilanthes (Acmella oleracea).
If harvesting for maximum effects then harvest only the flowers during the year. If picked on a regular basis the plant will produce multitudes throughout the year. The highest amounts of spilanthol the plants most active ingredient are in the flowers. Pick flowers when they are large and elongated to ensure the maximum yield, harvesting weekly or bi-weekly is often most effective. The rest of the plant can be harvested in full during the fall before the flowers start to fade into seed. Make sure this is a few weeks before the frost to ensure high amounts of spilanthol. If the leaves begin to turn bronze its really time to harvest the plant. We recommend cutting all the foliage first then pulling the roots as this keeps the soil from the foliage and reduces cleaning time.

While leaves can be harvested throughout the year this reduces the spread of the plant and thus the number of flowers it produces. Unless the leaves are particularly required for culinary use leaving the leaves encourages the plant to grow larger and produce more flowers. Since the highest concentrations of spilanthol is in the flowers its more prudent to harvest those and leave the leaf for later in the year.

Caution. When harvesting we recommend wearing protective gloves as constant contact with the plant can numb the skin. Wash gloves and hands thoroughly after handling the plant before touching anything else. Do not rub eyes! Can cause temporary eyelid droop.

Culinary Uses of Spilanthes (Acmella oleracea).
While many will state that Spilanthes adds a 'unique' flavor to salads and other dishes this is not really correct. The spilanthol in the leaves acts as an analgesic so basically it numbs the mouth. Thus you cant taste anything so its not a flavor it adds is mostly takes anything away so you cant taste it. For this reason it is often added to chilli dishes to offset the burn, which it does mostly because you cant taste the chilli due to a numb mouth. While it is reported as being used in some dishes from Brazil it like spices in India is often used to cover some maybe suspect ingredients that you might not want to eat if you could really taste them.

It has also been picked up as a 'fad' cocktail by some of the more experimental establishments and added to a drink gives a 'buzz' or numbness which some find interesting and entertaining.

Medical uses of Spilanthes (Acmella oleracea).
The plant got its name 'toothache plant' because it has very high concentrations of spilanthol that act as an anesthetic/analgesic. It has been used since ancient times in India for the treatment of gum and dental problems. Have a toothache then take a flower, fresh or dried chew and pack it around the tooth it can remove the pain for up to 30 minutes or more. Spilanthol is also a sialagogue meaning it stimulates the production of saliva which is extremely useful in those suffering from dry mouth as well as aiding in digestion and help to stimulate appetite. Swallowing the saliva after chewing will numb the throat offering relief from tickly coughs and soar throats.
Dilute infusions of Spilanthes are used to promote mouth and gum health and many consider it far superior to commercial mouth washes.

The numbing properties are useful in the garden for rubbing on stings bites and scrapes to dull the pain for short periods.

Spilanthol has been shown effective against blood parasites specifically malarial spirochetes and research is being conducted to its use in Lyme Disease. Its strong anti-bacterial effects have shown it effective against common pathogens such as Escherichia coli, Klebsiella pneumoniae, Proteus vulgaris, Pseudomonas aeruginosa, Salmonella gallinarum and Staphylococcus albus. It also inhibits the growth of yeast/fungal organism such as Candida albicans. It appears to stimulate the lymphatic system which aids in removal of toxic waste from the body.

Pet Note.
While there are no reported cases of pets eating Spilanthes its always possible. Some animals with chew on almost anything so if you have pets take care that this plant is not where they can get to it. A dog or cat with a numb mouth may be unpleasant for the animal.
Other uses of Spilanthes (Acmella oleracea).
It is claimed that Spilanthes also has the ability to reduce muscle tension topically which has lead to its inclusion in beauty products as a natural 'botox' treatment. When it penetrates the skin it will inhibit contractions of the subcutaneous muscles thus reducing facial wrinkles caused by tension or contracted muscles .
So why is it called Spilanthes?
Originally it was named Spilanthes acmella but of course botanists are always looking deeper into plant taxonomy and the latest expert opinion by Robert Jansen stated that it is more related to the Acmella species so it got renamed. However everyone in the herb community knows the plant as Spilanthes and has done for a long time. Thus the name is still used. For all we know the botanists will change their mind and put it back again.
Other names.
Paracress, Toothache Plant, Electric Daisy, Electric Buttons, Buzz Buttons, Peek-A-Boo, Eyeball Plant Eyeball Plant, Peek-A-Boo Plant, Toothache Plant, Spot Plant, Prickelblume, Alphabet Plant, Jambu, Australian Cress, and Brazil Cress