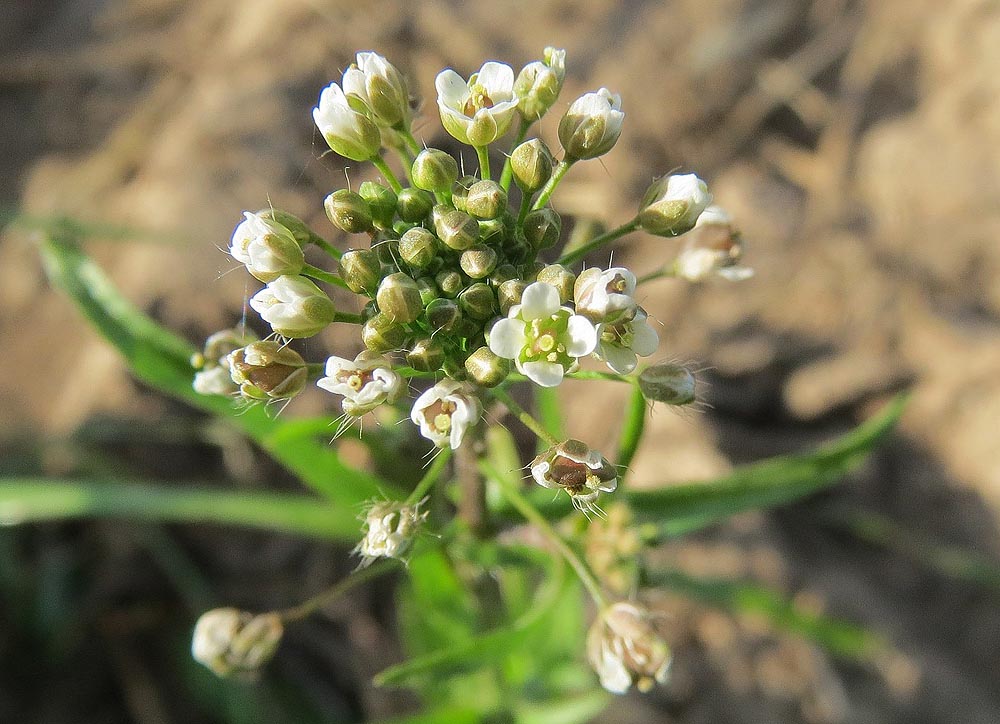 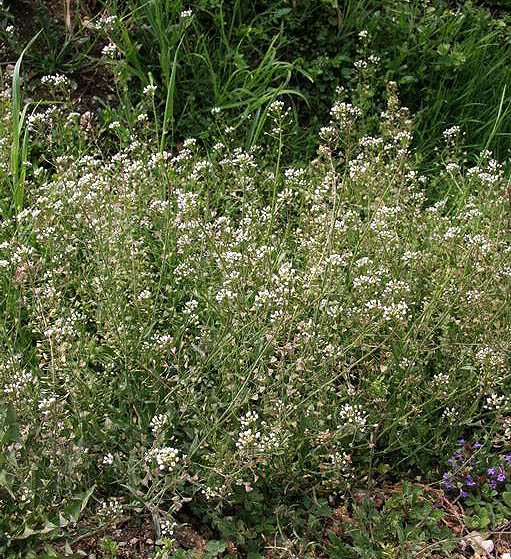 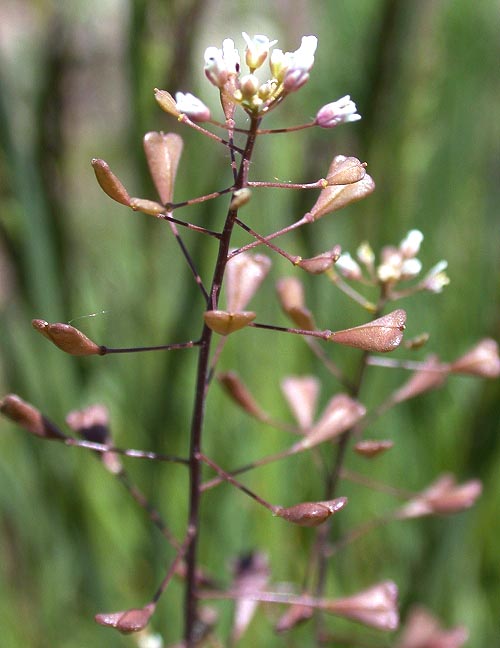 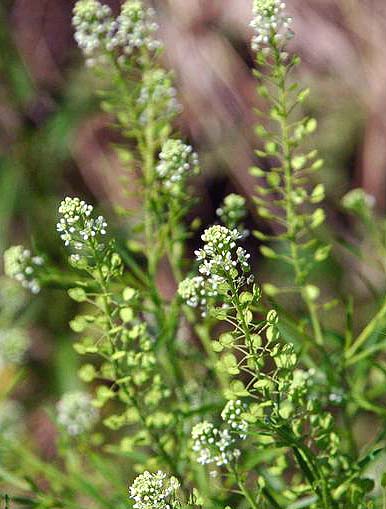 Tough little annual in the mustard family is very versatile. While many may consider this plant a weed others cultivate it as edible greens. It is most prized in Asian cuisine but is just as useful in western dishes. It grows very quickly and if well cared for can be harvested in just over a month from seed. It grows almost anywhere and can tolerate drought and poor soils. It is not very heat tolerant so will need shade in warmer zones. Does best in spring and autumn temperatures in hotter zones. Cooler zones all year and in full sun. It is also very salt tolerant and will draw salts from the ground sweetening the soil for other plants. Its very easy to grow and can be constantly reseeded for continuous production.

Description of Shepherd's-purse (Capsella bursa-pastoris).
Annual with interesting leaf patterns. The early young leaves are round to egg shaped with smooth edges and are arranged in opposite pairs. These form the first small basal rosette. As the plant grows the leaves change. They become larger and can be up to 5 inches (13 cm) long and 1 inch (2.5 cm) wide, they are deeply lobed often combined with toothed edges and grow in alternative pairs in a much larger basal rosette. Both the leaf and stem have star shaped hairs on the surface although you will need a strong hand lens or binocular microscope to see them..
From the center of the rosette rises a stiff reddish purple stem up to 30 inches (76cm) tall. This has leaves at the base of the stem only and those are alternate and mostly lance shaped. Flowers develop at the end of the stem continuously as the stem grows in height they may be single or branched Flowers are small and white sometimes tinged with pink, they are about 0.6 inches (15mm) across After flowering unique flattened heart shaped seed pods are produced. No other plant in the mustard family has these so it makes Shepherds purse easy to identify. Seed pods are continuously produced up the stem as the flowers progress. Most commonly this is during spring or fall seasons. Plants produce a central tap root with radiating secondary roots.

Growing Shepherd's-purse (Capsella bursa-pastoris) from Seed.
Seeds prefer light to germinate so do not cover. This is a cool season plant so it can be sown in autumn for early spring harvesting or started in pots in late winter for early harvest.
In spring direct sow as soon as the ground is workable. Clear and area of weeds and sow on the surface, protect from birds and keep moist. Plants are used to crowding so thinning is not necessary.
For early inside growing best grown in larger pots and harvested directly from there. Pots can be fairly shallow but not less than 8 inches (20.3 cm) deep and about 12 inches (30.4 cm) across. Fill with good potting soil. sow seeds on the surface and keep moist. If well cared for leaves should be ready to harvest in about 35-40 days from germination.

Can re-seed throughout the year if kept in a cool location that gets some full sun. Plants are not heat tolerant so does not do well in full sun locations during the summer in zones 6 and warmer. Autumn sown seeds may germinate and overwinter as a small rosette in zones 6-10 flowering early the following spring.

Location and Care of Shepherd's-purse (Capsella bursa-pastoris).
Plants will grow almost anywhere on any soil that is well drained. Its really not fussy about soil type provided its well drained and will grow on poor soils. For strongest plants with most desirable leaves for harvesting adding good organic material and feeding will produce best results. In zones 6a and above full sun throughout the growing season is ideal. For zones 6b and cooler shade will be required for any plants outside the cool spring or autumn seasons.
In zones 5 and above plants can be grown in full sun throughout the year in continuous rotation for constant crop. however they may not overwinter so early spring sowing will be required or start inside or in a hoop house.

Research has shown that plants do better in newly turned soil so it will need tilling rather than for no till agriculture which is likely to produce poorer results.
Very drought tolerant, once its growing it will tolerate little or now water. The leaves will be smaller and taste different from those in well tended soil but it will grow. Does not tolerate wet or waterlogged soils at all.

Plants are very salt tolerant especially for areas of marsh. They actually take up the salt and remove it from the soil making it more usable for plants that don't tolerate salt. If using for this reason ensure that all plants are carefully removed from the area and disposed of to avoid re introducing the salt.

Pollinator and Wildlife with Shepherd's-purse (Capsella bursa-pastoris).
Produces a fair flow of nectar so attracts a variety of pollinators including some butterflies. The Falcate Orangetip butterfly larva feed on its leaves along with several other butterfly species and many other insects. Some birds like to eat the seeds especially goldfinches and turkeys as well as some rodents. Deer and rabbits eat the leaves.
Harvesting Shepherd's-purse (Capsella bursa-pastoris).
Leaves can be harvested as soon as they are long enough. Individual leaves can be cut but more often the whole plant is harvested just before the flower stalk appears as this gives the best tasting leaves. Both leaves and roots can be harvested and eaten. Reseed often for regular harvesting. Best used shortly after harvesting, begins to deteriorate even in the refrigerator in less than a week.
Culinary Uses of Shepherd's-purse (Capsella bursa-pastoris).
Very popular in some Asian cookery especially rice cakes and soup. The leaves can be eaten raw in salads or cooked by steaming or sautéed as a green or substitute for cress or cabbage. Young leaves have a milder flavor older ones become more peppery.
The roots are sometimes used as a ginger substitute.
Seeds can also be eaten raw or cooked, they can be ground into meal but its very fiddly to harvest and process them and not really worth the effort.
Medical uses of Shepherd's-purse (Capsella bursa-pastoris).
The major go to herb for treating hemorrhages of all kinds the stomach, the lungs, the uterus and more especially the kidneys, some sources suggest almost any kind of internal bleeding. It can also be used to treat nose bleeds and premenstrual syndrome and heavy periods. It can also stimulate uterine contractions and is used in Traditional Chinese Medicine during childbirth and for postpartum uterine bleeding. Many sources state it is also useful in wound healing but studies have been inconclusive on this matter, sometimes if works sometimes not. Some sources state its use in treatment of some cancers most likely due to blood control. For that reason it can be used to aid in low blood pressure.

Due to its blood control it should not be used in those with heart disease, high blood pressure, thyroid disorders or heavy internal bleeding. It should not be used during pregnancy or when breast feeding. Since it contains small amounts of oxalic acid it is not recommended for those with kidney stones or those prone to them.

Other uses of Shepherd's-purse (Capsella bursa-pastoris).
This plant is pretty unique. Seeds exude a mucilaginous substance that can digest small insects and micro organisms. When seeds are planted it does this so it can create more nutrients for itself as it grows. the process is called myxospermy and is very uncommon in plants. This may be the reason that plants can flourish in poor soils. Humans have learned to take advantage of this process.
mosquito killer. Place the seeds in a saucer of water, they exude their mucilaginous substance which attracts the mosquitoes and other small insects and they become trapped and partially digested. The substance can also be added to water to kill mosquito larva. However there are no reports on how it effects other organisms so adding it to water where there are fish or other organisms is not recommended.

Shepherds purse will absorb salt from soil thus removing it and 'sweetening' the soil for other plants. Care must be taken to remove all the Shepherds purse material and discard it elsewhere to avoid salts returning to the soil.