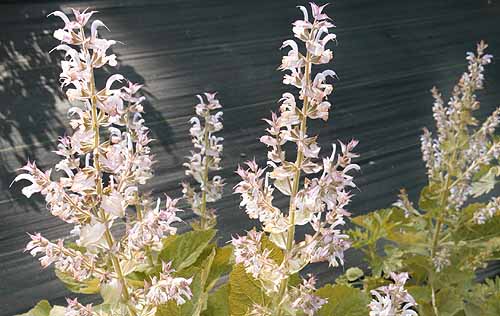 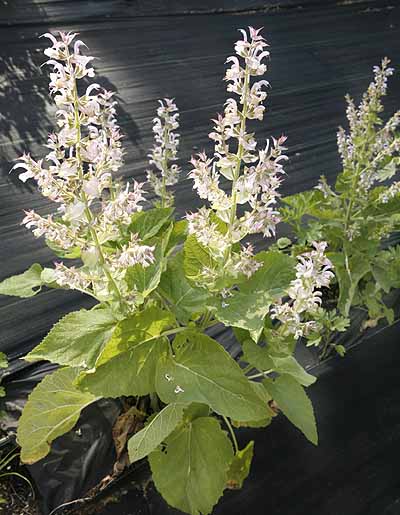 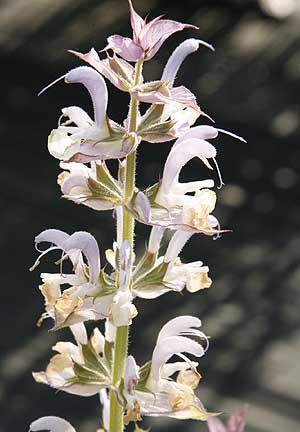 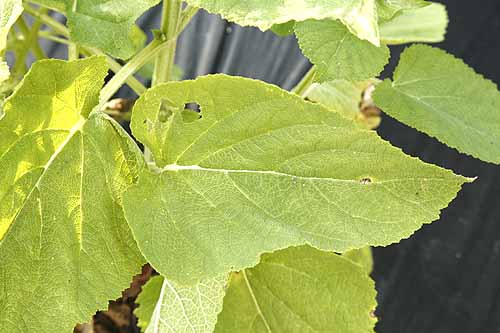 A very bright biennial that brings cheer to any garden. Bright pink/light purple flowers stand upright on 48" stems and attract attention from way across the garden. Easy to grow, does best in full sun and good soil but will grow almost anywhere except shade and waterlogged soils. Needs very little care and maintenance once sown, but will need re-sowing yearly to keep the blooms coming. Very aromatic and attractive to butterflies. Wildlife don't eat it.

Description of Clary Sage (Salvia Sclarea).
Biennial plant hardy to zone 6 and with good protection possibly zone 5 or even 4. During the first year it produces a group of hard heart shaped leaves about 8-10" long and 6-8" broad. These are almost stalkless pale green with white central veins, wrinkled with irregular toothed margins and covered with velvety hairs. In the second year the leaves tend to be slightly smaller and have longer stalks. They begin as a low group of leaves but tall square stalks gradually rise from the groups with the leaves attached in opposite pairs along its length. Flowers are produced in a long loose terminal much branched spike at the top of the stem than can reach 48" in height and appear in late spring to early summer. The flowers are arranged in whorls. Flowers are similar to garden sage with tall back petal like a tall arching tube from which the stamens protrude forwards. These are usually lilac or light purple in colors. The lower petals are smaller and stick out to each side of a lower papery central petal. These are most often white, but can be tinged with blue or pink. The whole plant has a strong aromatic scent. The seeds are fairly large and held in brown papery bracts. After flowering the plant dies.

Location and Care
The ideal location is in full sun in well drained soil with lots of organic material. With these conditions it will produce at its best. However it will grow and flower in almost any type of soil and any location except waterlogged and heavy shade. Its not fussy about soil type although the more shade the more straggly the plant. While it prefers to have some regular watering it can get by with very little only really needing some in drought conditions, it will however need more on well draining sandy soil. Watering once a week for most conditions is usually sufficient.
Plants have large leaves so allow plenty of space and prevent it from overshadowing other plants. Space at least 2 feet apart if in good conditions plant at 3 feet.. Staking is rarely if ever needed. Cutting flower spikes after flowering often encourages a second flowering although usually not as spectacular as the first. For continuous flowering sow plants yearly so always have some in bloom and some coming on for next year.
Fairly easy plant to grow and care for and does not appear to have many pest problems.

Growing Clary Sage (Salvia Sclarea) from Seed
Seeds require filtered light to germinate so barely cover seeds when sowing.
For best results start indoors in late winter. Plant in small pots or individual cell trays and barely cover the seed with fine potting soil. Keep moist until the germinate, which is usually about 14 days at about 70°F. Grow on until plants have at least four good leaves and are about 4 inches tall before hardening off ready for transplanting. See our general growing instructions for more information.
Plant out in later spring and water in well. Plants will need plenty of water until they are established, then watering can be cut back to once a week unless in drought conditions.

Sowing outdoors directly. Seeds can be sown in well prepared well weeded bed in spring when all danger or frost has passed. Keep area moist until plants have germinated. Prick out and allow to grow on. Transplant in early fall for best flowering position in the spring.

Harvesting Clary (Salvia Sclarea).
Harvest leaves in second year just as the flowers are coming into bloom. If harvesting for oil harvest during late bloom when the seeds are in the milky stage. Most of the oil is in the flowering stalk so collect just this and a few pairs of leaves. Oil content is lowest from noon to 3:00 pm so for highest oil harvest in early morning after dew has left the plant or in late afternoon.

Medicinal uses of Clary (Salvia Sclarea).
Has been used since the time of the ancient Greeks to treat digestive disorders most commonly indigestion and gas. It is also extremely useful in treatment of hot flashes and other menstrual disorders. It has an estrogen stimulating action so it is most effective when this hormone is low, thus its use in hot flashes. It has very antispasmodic abilities and is also used to treat kidney diseases. The oil has been show to effectively help reduce blood pressure and possibly anxiety.
The seeds once soaked in water produce a thick mucilage which is very effective in removing small particles of dust and such from the eyes. It has been used for centuries in this capacity for centuries.

Culinary Uses of Clary (Salvia Sclarea).
While this species of sage is not considered the best culinary herb the leaves do have their own special flavor which is strong, warm and aromatic. They are used to flavor some cooked foods and are often added to jellies and conserves. The leaves can also be dipped in batter and cooked to make delicious fritters. The flowers can be added to salads or made into a tea.
Historically it has been used as a hop substitute in flavouring beer, imparting considerable bitterness and intoxicating properties it is also added to some wines to produce a more muscatel flavor.

Clary sage Oil.
Essential oil produced from the flowering stems produces a highly aromatic odor that resembles ambergris so it is commonly used in the perfume industry as a substitute and a fixer and preservative. The oil is also used in soap making, incense, potpourri and aromatherapy.