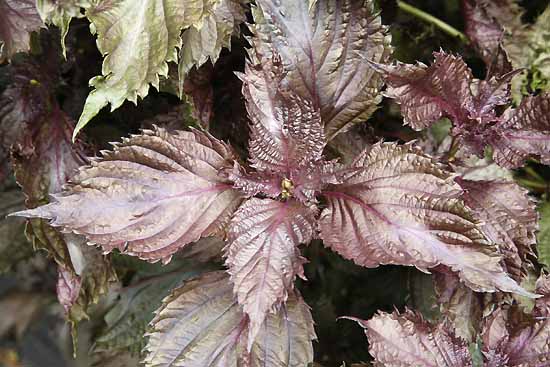 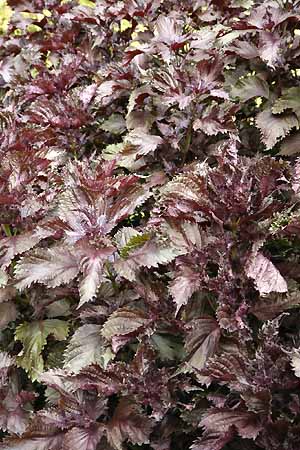 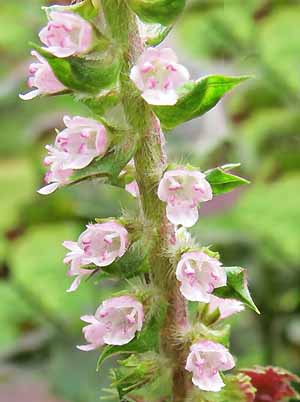 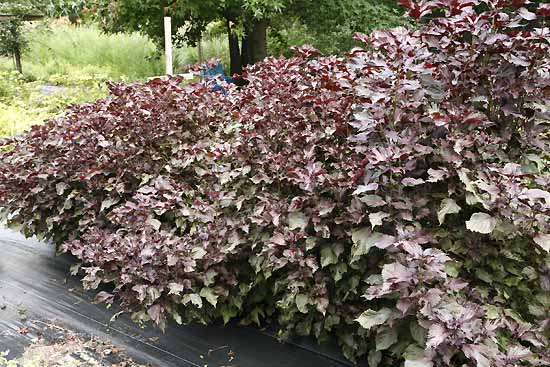 Perilla is a lovely plant both as an ornamental and as a food plant. Ornamentally it is grown for its interesting leaves which are crinkly and deeply veined making them stand out if used in a flower bed. Since it can reach 4 feet in height it makes a good back border plant. It is very aromatic and the slightest touch will set off the scent, so don't plant it too close to your deck unless you love the smell. It's a tough plant, it does very well in hot sunny locations but can also thrive in some shade. It needs very little maintenance once established and as an ornamental its pretty drought tolerant. More water is needed if you want to harvest the leaves.
Wildlife don't eat it. Deer and rabbits avoid it. Since it requires short days to flower it produces blooms late in the fall when most other plants have ceased blooming. This makes it ideal for gardens that encourage wildlife as it is a source of nectar when there is little else available. Honey bees, native bees and butterflies flock to the flowers.
There are two major kinds red and green. Each have their own particular aroma and flavor but the basic appearance is mostly the same.

Description of Red Perilla (Perilla frutescens nankinensis).
Perilla is hardy to zone 8 (some say 10) In these zones and higher it can be grown as a perennial. In zones above 8 it is grown as an annual. Red perilla is a very attractive plant with deep red leaves which can be scarlet in places up to four inches long. The leaves have a heavily serrated undulating border and are deeply veined and wrinkled giving them an interesting texture. The plant develops several tall bushy stems with luxuriant leaf growth that can reach 3 feet in height, more if conditions are really favorable. In late summer tall flower spikes arise from the ends of the branches. These can be over a foot long and are covered with small almost tubular flowers that are white to pinkish or mottled with pink. They are not very showy but the butterflies and native bees love them. The plant is grown mainly for its interesting foliage.
Red perilla has a much milder flavour and aroma than the green variety. It's much more mellow and whole leaves can usually be consumed without overwhelming the mouth. The flavour is more basil with a little cinnamon and no cloves. (according to a local gourmet chef who chewed on our leaves). Some report the red variety as being bitter. We have not found that with ours. Many who have tried it prefer it to the green variety which can be overwhelming on the palate.

Plants similar to Perilla
Perilla looks rather like an overgrown nettle or a coleus plant. It is a member of the mint family - as are the others - so the appearance is understandable. Some of its common names reflect this resemblance however its not a mint and not a coleus or a nettle.

Location and Care of Perilla.
Both green and red perilla are pretty tough plants. They can survive in bright hot sunshine but will also do quite well in semi shade. They will grow in almost any soil type that is well drained. Do not do well in heavy clay or waterlogged soils. Do not need any fertilization but add some organic material to the soil before planting and this should be enough. Once established the plant is fairly drought tolerant and can go some time without water. However if leaf production is required for food some water is needed: a soaker hose at the base of the plants is ideal. For prolific leaf growth some water every day is best; for ornamental use twice a week should be sufficient unless there is very little rain.

If bushy plants are desired pinch off the tops to encourage branching. Flowers can be pinched off if leaf production is desired. If allowed to flower, cut flower stalks when finished to prevent self seeding. Plant will seed prolifically if allowed.
The plant requires short days to flower so provides flowers late in the year when many other plants have ceased flowering. This is ideal for many insects and especially honey bees which love the plant.

Growing Perilla from seed.
Can be sown directly in the ground or started indoors for earlier production. Seeds germinate best around 20 C (68 F).
Sowing outdoors. Prepare bed and surface sow the seeds. They may be very lightly covered if desired. For information about growing with few weeds see herb bed preparation.
Starting indoors. Seed is fairly large so sowing in individual pots or cell flats is recommended. Surface sow or only lightly cover seeds. See general growing instructions for more detailed information.

Harvesting Perilla (Perilla frutescens nankinensis).
Leaves can be harvested once the plants reach a foot in height. Pinch out the tops of the plant to encourage the plant to bush out. This produces more leaves. Young leaves tend to have a less spicy flavor while older leaves have more bite. Whole branches can be removed if more leaves are needed.
If drying for later use, take whole branches of leaves just before flowering when the flavor is at its peak. Cut the whole stems, bunch and hang upside down in a warm dry dark space until dry. Then strip the leaves from the stalks and store in air tight containers in a cool dark place to retain the flavour as long as possible.
If harvesting seed use a large bin to collect whole branches at one time.

Edible Uses of Perilla (Perilla frutescens nankinensis).
This plant is extremely popular in Japanese and Korean cooking where the leaves are used fresh or pickled to flavor rice, fish, soups and vegetables as garnish and as an onigiri wrap. Chopped they are used in stir fries, tempura, tofu, with cold noodles and salads. It is used by many Japanese when preparing Western dishes as a substitute for sweet basil.
Seedlings are added to salads, older leaves are used as a garnish or flavoring in many dishes. The older leaves are also salted and used as a condiment for tofu and as a garnish for tempura; it also makes a nice pesto. They are one of the ingredients in 'Shichimi' or 'seven spice' mixture. Leaves from purple/red cultivars are used to color preserved fruits especially pickled plums. The seeds are preserved in salt or are used as a spice in pickles, tempura. miso and crushed and added to mustard. Apparently the seeds of the red variety are preferred for this.
Essential oils extracted from the plant are also used as a food flavoring in candies and sauces.

Medicinal Uses of Perilla (Perilla frutescens nankinensis)
Virtually all the plant is used in Oriental medicine. It is considered a warming herb and has a lot of different properties. The leaves are used to treat colds, chest stuffiness, vomiting, abdominal pain, lung infections, influenza prevention and many others. The juice of the leaves is applied to cuts and wounds. The seeds are used internally in the treatment of asthma, colds and chills, nausea, abdominal pain, food poisoning and allergic reactions (especially from seafood), bronchitis and constipation.
The crushed leaves rubbed onto the skin serve as an insect repellant; it is reported to be especially effective against ticks
Perilla Oil is obtained by pressing the seeds of perilla, which contain 35 to 45 percent oil. It is most commonly used in Asia where it is valued more for its medicinal benefit