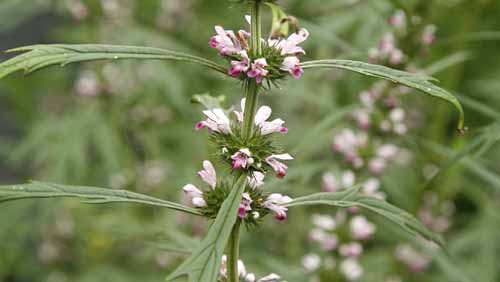 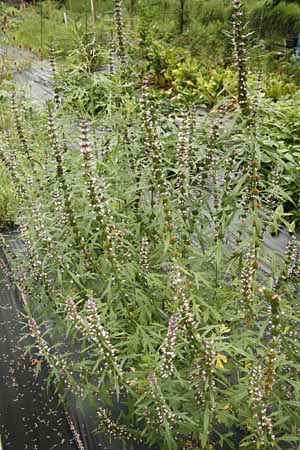 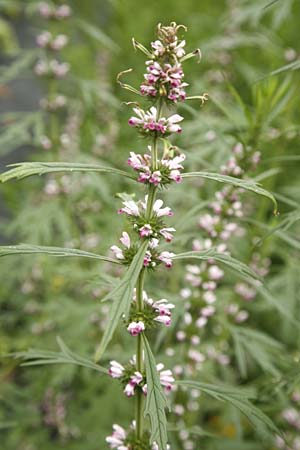 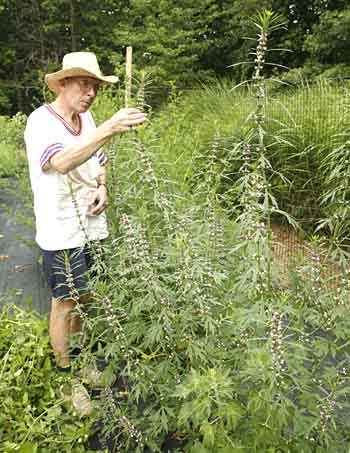 Also known as Marihuanilla is a tall pink flowering annual with fairly sparse leaves. It can grow up to six feet tall in one year and makes a dramatic back border plant. It is easy to care for and will self seed to produce two generations in one year. It is loved by honeybees and butterflies but seems to have few predators.

Description. The immature plants have rounder leaves of bright light green lobed and rounded. As the plant grows these change to deeply cut lobes with toothed margins that are produced at space intervals in opposite pairs up the fairly large and thick stem. Once above the lower ground level each leaf pair also supports a whorl of pink tubular flowers that circle the stem. The flowers are about 1/3 to ½ inch long and bloom prolifically with each bloom lasting only a few days and leaving behind a spiky hard calyx that holds the small seeds. Flowering from the bottom of the stem upwards seeds can ripen at the base while new flowers are still being produced at the top. The stems and calyx are tough and woody taking a long time to decompose during the winter months.

Although many sources state that only a single stem in produce almost all of our plants have always branched out creating a more bush like appearance with each stem producing leaves and flowers.

Location and Care. The plant needs full sun that is well drained but is not particular about the type of soil as long as the pH is somewhere in the central range (not really acid or alkaline). It does not like waterlogged soil. It grows quickly and easily and needs little care except to keep the weeds down. The flowers are very attractive, it makes a nice back border plant and of course is grown as a herb and crop plant. It will self seed if the plants are left in the garden and care should be taken as the seeds can travel considerable distances to seed in unlikely spots.

The plant is not frost tolerant or hardy so should be considered as an annual in lower zone numbers. Here in zone 6 the first frosts cause it to wilt over and it never tolerates the winter. Lower zone where there is no frost the plant will continue to grow and flower throughout the year. However it will also act like an annual and once it has produced a certain amount of seed the plant dies off and needs to be reseeded. The good thing is it grows very fast reaching 4-6 feet in about 4 months. Thus it is possible to achieve two generations of the plant in a single year here in zone 6 although the second one tends to get hit by frost and not set seed. Early spring sowings will bloom by June and later plantings will bloom until the frost wilts them down. However in milder climates the plants will bloom throughout the year if seeded accordingly and can in warmer climates apparently grow as a perennial bush.

If intending to grow this plant for leaf production be aware that leaves are sparse, and although they can be long - up to 4 inches in length because they are deeply cut there is not a lot to each leaf. A lot of plants need to be grown to achieve a substantial amount of leaf. However since the plants can be sown continuously throughout the growing season plants can be harvested in rotation. The basal leaves of the plant tend to wither and die off as the plant grows taller so these should be collected early to ensure maximum production.

Uses
As indicated by its name this plant is from Asia somewhere around southern Siberia, China, Korea, Japan, and Vietnam no one is exactly sure where it originated since it has been used in Traditional Chinese medicine for thousands of years. The plant is used in the treatment of painful and excessive menstruation, post-partum bleeding, edema, kidney complaints, kidney stones, eczema and abscesses. A tincture is used in the treatment of rheumatic fever.

It is also described as being mildly narcotic and the plant leaves do contain 0.05% of an alkaloid called leonurine. This has a curare-like effect on the motor-endings of the nervous system, acting in small doses as a stimulant to the respiratory system but in large doses causing respiratory paralysis. IT is often mixed with other herbs to create smoking blends.