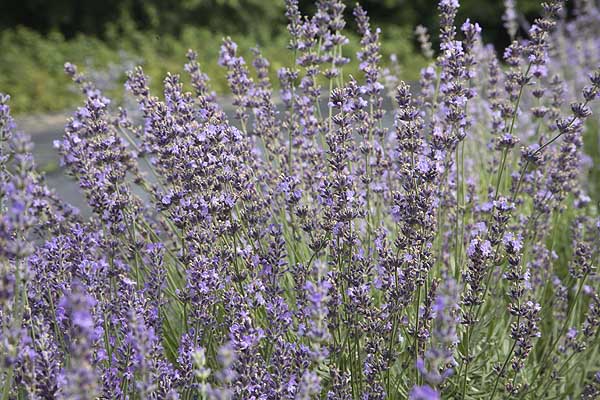 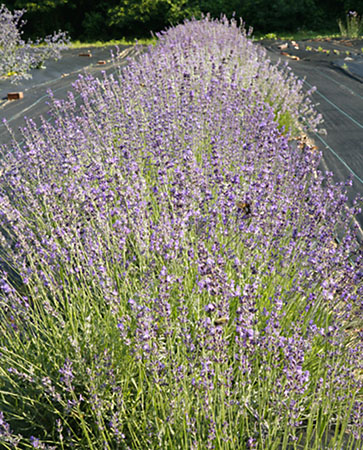 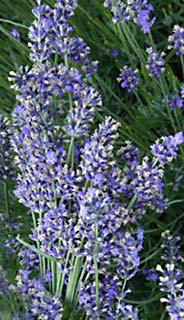 It's hard to imagine a garden without at least one lavender bush it's so versatile. This wonderful plant is very drought tolerant and has such lovely flowers and of course a wonderful scent. It likes fun sun and does quite well in heat. Once established it takes very little care and maintenance, although a good pruning once a year keeps the bushes flowering more prolifically and gives them better shape. Deer and rabbits don't eat it. There are many different kinds of lavender plants. The one we sell here is English Lavender the one that's used in almost all the lavender bags and lavender products that you see on the market.

Lavender is a woody perennial plant that can also be described as a low bush or shrub which can grow up to five feet in height. The gray green leaves are narrow tapered oblongs attaching directly to the stem at the base in a spiral whorl around the stem. The flowers arise in late spring on stalks above the plant that can be anything from a few inches to two feet in length. The flowers can range from a deep purple blue all the way through to white.

Bushes vary a great deal. Some have a very compact habit forming small rounded mounds others are more sprawling and need to be pruned into shape.

Growing from seed is easy but it takes patience. Lavender is very slow to germinate. I don't care what other references say, it is. All the plants on our farm were grown from seed. Some seeds germinated quickly from seeding in early April others were still germinating come October of that year. Germination rate is often also quite poor, that I will agree on, often only about half the seeds germinate. However I suspect that some of this is because the grower is not patient enough and throws away the seed tray before all the seeds have germinated. Following our General Growing Instructions with result in the best germination rates. Place your seed tray(s) somewhere you can look after them for a long period of time, somewhere under cover is better than outside as it prevents weed seeds from populating your seed tray. Just ensure its somewhere you will remember to water it on a regular basis. Using a individual cell seed tray is recommended as you can then easily remove seedlings as they grow without disturbing others that have yet to germinate. If you cannot do this ensure that the seeds are planted far enough apart that they wont interfere with other seeds when the plants are removed. Pot up growing seedlings in their own pots and nurse them along to about 2" (5 cm) high before planting outside. Early germinating seedlings need some care until they are large enough to move outside, then they will begin to grow rapidly. Many of ours bloomed in the first year, though not very profusely.
Seeds that germinate late in the season should be kept inside over the winter and planted out after frost has passed the following year. Very small seedling plants may not survive well so give them the best chance you can. Keeping your seed tray until the middle of the second year is suggested just in case more seeds decide to germinate. After this empty the tray out in the area where your lavender is growing so if any more do decide to grow they are in the right spot.

Expect to get a wide range of plants when you grow from seed. Flowers will range from white to deep purple some bushes will be compact while others are more sprawling. Some have short flower stalks while others can be very long. If you only want a few plants grow them on for a while and then discard the ones you don't like. Cuttings can be taken from bushes you really like to increase the number if you want.
Poor and slow germination accounts for the reason lavender plants are so expensive to purchase.

Lavender is an ideal plant once established. It likes sunshine but will tolerate a little shade and made need more in hot sunny climates. It is very drought tolerant and needs very little water once established. In a prolonged drought I would recommend some extra water to ensure survival but the plants can survive.
It is hardy from zone 5-8, however colder damp winters may occasionally kill plants. We lost three bushes in the very cold snowy winter of 2008-09 out of about 550. We are in zone 6b. Lavender must have a well drained soil, it does not like it's roots to be continuously wet so take care if planting in a clay soil to improve drainage first.
Although many reference state that it's essential for he soil to be alkaline this is not essential. The soil on our farm is pretty acid (it was pH 5.2 when we first arrived) and the lavender does just fine. We do supplement the soil with lime but now the bushes are well established they don't get as much buffering so it pretty acid now considering that any irrigation water will also be acidic. It does not need much in the way of fertilizer and once established can be pretty much neglected. Leaner soils with less fertilizer produces a higher concentration of essential oils meaning you get a better scent.

Lavender grows very quickly once the small plants are planted. Our bushes grew from little seedlings to about two feet all around in two years and they continue to increase in size every year. When planting make sure you leave enough area around the plant for it to grow, and grow fast. If you want a lavender hedge still space the plants about three to four feet apart of they will grow together too quickly and not establish a thick leaf base. Most of my plants merged into a long 'hedge' in the third year after planting from seed with a spacing of four feet. Make sure you water well in the first year to ensure they are established, then watering can be reduced and even stopped.

Some light pruning always occurs if you are harvesting the flowers and this may be sufficient for some bushes. However taller or more sprawling bushes can be cut back to about one third their height if desired. Prune in spring before any flower stems arise. If you live in a colder area where dieback of bushes occurs do not prune until you see new leaf growth on the plant, then cut back the older dead portions. Do not cut back new growth or the plant may give up and die.

When you harvest your lavender will depend on what you want it for. For culinary use the flowers are usually picked when they are still in the tight bud stage, or in full flower depending on what you want.
For use as lavender bunches, wands or bags the flowers are usually allowed to open and begin to bloom this gives a fatter larger lavender 'flower' and thus is more 'filling'.
Harvest early in the day if possible on a dry sunny day when the dew has gone from the plants and the sun is not yet too high to decrease the oils in the plant. Cut to the base of the stem, don't worry if you get a few leaves as well, just consider it as a simple pruning.

While most commonly used as a an aroma lavender is perfectly edible and is often used to flavor foods. Usually in up market restaurants it is used in sauces, butter, pickles ice cream as well as jams and jellies. The flavour is very subtle and pleasant and not at all what you would expect from the aroma.

Lavender is well know for its relaxing properties. It has a soothing affect on the nervous system and is considered a fairly strong calmative nervine. Most commonly the essential oil is used externally as an inhalant, lavender 'scent' is present in a large number of products for creating aromas in the home. Care should be taken however to ensure that the products do in fact contain lavender oil rather than synthetic lavender scent which may smell the same but does not have the calming properties of true essential oil.
The essential oil is much milder than many other essential oils and it can be used directly on the skin where it can be used as an antiseptic and to help heal wounds. It is especially useful in burns, placing essential oil on a fresh burn can help it heal much faster and with less scaring. While the essential oil is milder is should still not be taken internally where it can be too strong for the body to handle. A tincture of the flowers is most efficacious internal method. Lavender is considered a nervine herb but is also a diuretic, antiseptic and to calm stomach complaints.

Externally it is used in many forms. Bags of lavender can be hung beside a bed to help to soothe and sedate for relaxing sleep. The oil can be rubbed on the temples to help with nervous headaches. It can also be sprayed around the house to create a calming atmosphere that can be restorative. Its powerful antiseptic properties are able to kill many of the common bacteria such as typhoid, diphtheria, streptococcus and Pneumococcus, as well as being a powerful antidote to some snake venoms.
A very effective house spray can be made mixing a few drops of lavender oil with a pint of distilled water. Place in a spray bottle and shake well, then spray. Keep shaking to ensure that the oil is well distributed through the water. Since a good essential oil leaves no residue and neither does distilled water this can safely be sprayed on any surface without leaving marks when it dries. Just ensure that the surface does not react with water before its dry. Can be used to spray carpets, bedding all kinds of fabrics, clothing or whatever you consider important. The aroma often lasts for several days from one spraying.

Other uses of Lavender (Lavandula angustifolia).

Lavender is used in all kinds of products from soaps, face scrubs, wands and a myriad of beauty products. Lavender buds are also placed in bags which are distributed amongst clothing, most often underwear to infuse it with a pleasant aroma and to help keep bugs and rodents away. The flower fronds are woven into wreaths that are used to decorate and perfume homes. Such wreaths or lavender bags are hung near the bed to help promote good relaxing sleep. Lavender buds used in the way can last for many years keeping their aroma exceedingly well.

English is the most commonly used for oil extraction along with French. However each lavender and often each variety of lavender within that species may have its own subtle differences in aroma. Not only that but it depends on when during the flowering stage the lavender is picked. The aroma can change dramatically from light and fruity to darker with heavier tones, so its important that you have a good idea of what you want your lavender oil to smell like and get one that fits your needs. If you purchase something that does not smell as you thought it should, this does not necessarily mean that the oil is not lavender it may just be from a different species, or even variety of the species you wanted or it could just have been harvested at a different time. Aromatherapy specialists have detailed data about all kinds of subtleties that can change the mixture of oils that make up lavender it can get very complex.