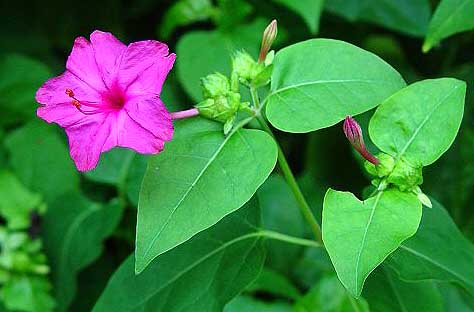 Four o'clock plants are a wonderful addition to the garden. Blooming profusely from early summer until the frost they brighten any garden, patio or deck. Flowers open in the later afternoon or early evening, hence their name, so can be enjoyed by everyone when they are home from work. Easy to grow they need little maintenance once established, will grow on almost any soil except wet and waterlogged. They are fairly drought tolerant once established. Grown as an annual in zones 6 and above they will overwinter in warmer zones to be enjoyed year after year. Reported that deer do not choose them. Ours were grown behind a fence so we can't say. Hummingbirds love the flowers as do sphinx moths and other long tongued pollinators.

Description of four o'clocks (Mirabilis jalapa).
Four o'clock plants are perennials but only to zone 8, some say 7b. In the rest of the country they are grown as annuals. The fast growing plants have ovate light green leaves about 2-4" (5-10cm) long, with smooth edges and short stalks arranged in opposite pairs on much branching stems. Stems are weak, break easily and tend to flop over as plant becomes larger. The flowers are borne singly or in clusters from the tops of the stems and the many side branches. Individual flowers are trumpet shaped up to 1" (2.5 cm) across and about 2" (5 cm) long. They are most commonly purple/magenta but can also be yellow, white or even bicolored and flowers of different colors can be produced on the same plant at the same time. Four o'clocks bloom late in the day into the evening on sunny days but will open earlier on shady or rainy days. Blooms last only a single night but the wilted flower stays on the plant until the seed has been formed. This can give the plants a slightly wilted look in the mornings, but new flowers appear every afternoon. Blooming begins in early summer and will continue until the frost in higher zones but can bloom longer in warmer areas. The flowers are followed by single large black or dark brown seeds about the size of a pea. These stay in the cup-like calyx of the plant for considerable time until they fall to the ground.
Four o'clocks form shrubby bushes growing up to 3 feet (91 cm) wide and just as tall in a single year from seed. Flowers are very fragrant and attract humming birds, moths and other nocturnal pollinators with long tongues. Plants produce large tubers which in warmer climates can be left to regrow the following year. In coolers areas they can be dug up for replanting the following year or left and reseeded.

Location and care of Four o'clocks (Mirabilis jalapa).
Four o'clocks are not fussy plants. They will grow in almost any soil and any conditions, although they do not tolerate waterlogged soils. They prefer full sun to look their best but can tolerate some shade. In higher zones (6 and above) full sun is recommended lower zones can tolerate some shade at times during the day and still do very well. However they do require full sun at some point during the day. Shady plants tend to be a little more straggly and do not form dense bushes like sun exposed plants do.
Although four o'clocks much prefer to have reasonable moisture in a well draining soil, they can be remarkably drought tolerant due to their fleshy tubers. These plants will grow well in hot sunny areas with less water. Watering once a week especially by soaker hose is recommended for zones 8 and higher as heat takes a toll on the plants. For lower zones (6 or less) plant will flower reliably without much additional water all summer long. Addition of some water will ensure that the plants grow best and give more flowers but it is not essential.
The large fleshy tubers allow the plants to overwinter and regrow the following year in warmer zones with little or no effort. It is recommended in zones 7-9 that the plants are mulched in well with compost and straw to allow them the best chance of winter survival. Above zone 7 tubers can be dug up for replanting the following year or just restarted from seed.
Since the stems are not particularly strong the plants tend to flop over unless given some support. Staking or using a plant frame is suggested. Stems tend to be weaker the more shade the plant has.
Once established four o'clocks take little care or maintenance. In warmer zones the plants may reseed and become a nuisance, not a problem in zone 6 and above.

Container growing four o'clocks.
Four o'clocks are ideal for container growing. A five gallon or larger pot is ideal and they make an excellent patio or deck planting as they flower daily and in the evening when everyone is home from work and can enjoy the blooms. In addition in cooler climates the pots can be stored in a garage (attached to a house, unattached garages are too cold in winter) and overwintered. Pots can then be replaced on the deck the following spring and the plants will grow again. Do not water pots during the winter months, allow tubers to become dormant.

Growing four o'clocks (Mirabilis jalapa) from seed.
The seeds are large, about the size of a pea, and grow rapidly. Thus we recommend starting in individual pots or direct seeding when all danger of frost has passed. Starting indoors offers faster larger plants: begin about 6-8 weeks before last frost date for four o'clocks. Germination can take anywhere from 1-3 weeks, some suggest that light is needed for germination but we have not found this necessary. Grow in good potting soil and plant out when all danger of frost has passed. For more information on sowing seeds see general growing instructions.
Set plants at least 12-24 inches apart. Closer spaced plants can be used as an annual flowering hedge.

Storing tubers of (Mirabilis jalapa).
Once plants are established tubers can be dug up every fall if desired and stored in a cool dry area of the basement or frost free garage. Dig tuber, brush all the soil off, leave out to let any extra soil dry then place in a cardboard box with peat moss for the winter. Do not use a plastic box or tubers may rot.

Edible Uses of four o'clocks (Mirabilis jalapa).
The young leaves can be cooked and eaten as a vegetable but are not recommended. The crimson flowers are used to make an edible dye for coloring cakes, jellies and desserts. The seeds can be crushed as a pepper substitute. Again not recommended. (We did not like it).

Medicinal Uses of four o'clocks (Mirabilis jalapa)
The roots have been used by South American natives for centuries. A decoction of the root is used to treat dropsy, diarrhea, dysentery, indigestion, abdominal colic, fevers, edema, syphilis, and liver affections and to combat intestinal parasites. It is also used as a diuretic and bowel cleanser. Externally the juice of the flower is used to treat herpes lesions, earaches, and skin infections such as itchiness, eczema, herpes, skin spots and to treat infected wounds, bee and scorpion stings. Flowers can be added to hot baths to help combat colds and flu. It has also been used to treat mumps and hasten childbirth..