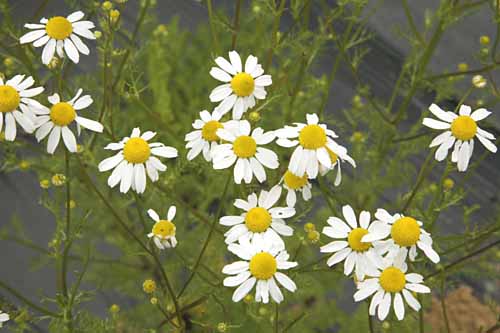 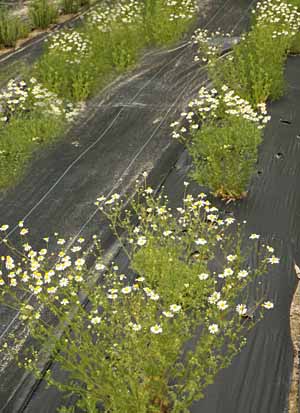 This plant is well known for its flowers used as a herb in chamomile teas and other herbal medicines. However only the flowers of this plant have the characteristic odor and are used in teas etc the foliage does not smell. For most herbal preparations this plant is not considered as true chamomile but known as scented mayweed or wild chamomile. For those wishing to grow chamomile for herbal purposes the perennial a Anthemis nobilis also known as Chamaemelum nobile should also be considered.

An annual plant growing to 2 feet (60cm) in height and about 12 inches (38cm) wide. The stems are much branched with sparse finely divided leaves of mid to dark green. Each branch holds a solitary terminal flower which have hollow conical receptacles with small white petals surrounding it forming a daisy like flower. The plant flowers profusely beginning around June to July, the plants produce a prolific number of flowers that continue until around mid August when the seeds begin to ripen.

Chamomile seeds need light to germinate so never cover the seed. Seeds germinate in cool conditions so sow early or keep away from other seed trays that require warmth. Best started in seed trays as seedlings are very small and grow slowly to begin with. Best grown in individual cell trays as seedlings do not like to be transplanted bare rooted. Move to larger individual pots as soon as possible then grow on to larger size until roots are just showing in the base of the pot then transplant out to desired location with a little root disturbance as possible. Too much root disturbance can stunt plants. Plant out early when its still cool just after last frost date.

Direct sowing.
Can be sown directly outside if desired. Sow either in late summer or fall for early spring germination or in very early spring before the leaves have broken on the trees. Direct sowing ensures the correct temperature for seeds to germinate but puts the little plants in direct competition with weeds. Chamomile seedlings grow slowly so can often be swamped by weeds before they reach a suitable size.

Chamomile is not good at beating out weeds even if transplanted and some weeding will be necessary to keep plants healthy and stop them being overrun.

Prefers full sun but can tolerate some early morning or evening shade. Needs a well drained soil and is best in sandy soils but will grow in others, does not do that well in very heavy clay. Such soils will need amending with organic material (compost) to break up the soil before planting. Will grow on fairly acidic soils as well as neutral pH. Does quite well on poorer soils. Space plants about 10-12 inches (25-30 cm) apart as they produce many branches and bush out somewhat.

German chamomile is by far the easiest to harvest since the plants are taller and they produce many more flowers than true or roman chamomile, however the flowers are smaller so you need more of them. Flowers should be snipped from the plant when they are in full bloom. This can either be done using the fingers to snap off the stems but its very time consuming. They can then either be sun dried or dried in a dehydrator. Be aware that if you are intending to grow for use a herbal tea you need a LOT of plants to produce only a small amount of flowers for tea. Dried flowers are small and take up little space. If you drink a lot of herbal tea you will need quite a large chamomile bed to sustain you.

Mostly to make tea, which can have a calming effect. However flowers tend to have a bitter flavor so need sweetening by most people.

The tea is excellent for many digestive disorders as well as nervous tension and irritability. It is also used to treat coughs, bronchitis, fevers and colds as well as inflammation of the mouth and pharynx. It is considered to be highly antiseptic and antispasmodic but very mild so is commonly used to treat children especially when they are teething. It is also used in the treatment of irritable bowel syndrome, Crohn's disease, peptic ulcers and hiatus hernia. The volatile oils have very high anti-allergenic properties and are distilled and used in the treatment of asthma and hay fever. Externally the flowers are used to treat wounds, sunburn, burns, hemorrhoids, mastitis and leg ulcers.

In rare cases allergic reactions have been observed with people using chamomile. This can cause tongue thickening, tightness in the throat, swelling of the lips, throat and eyes, itching over the body. People who have a severe allergic responses to ragweed (ragwort) should be cautious of a possible cross-sensitivity to chamomile.
Also Chamomile tea is consumed in large doses on a regular basis it can cause severe vomiting. t

There are many plants that look similar to chamomile. If harvesting in the wild (or from migrating seeds in your garden) make sure that the plant you have really is chamomile. Few others have the same distinctive aroma and the leaves are characteristic but the flowers can be very similar in many species some of which can be dangerous if taken in larger doses so always make sure you have the correct plant.