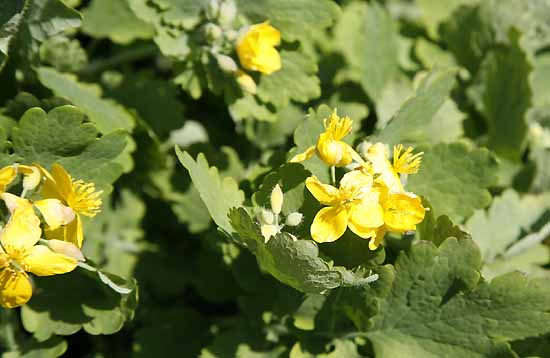 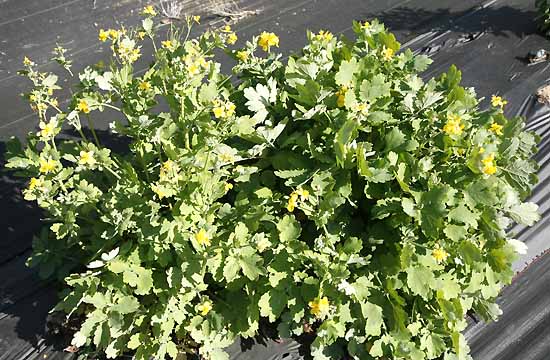 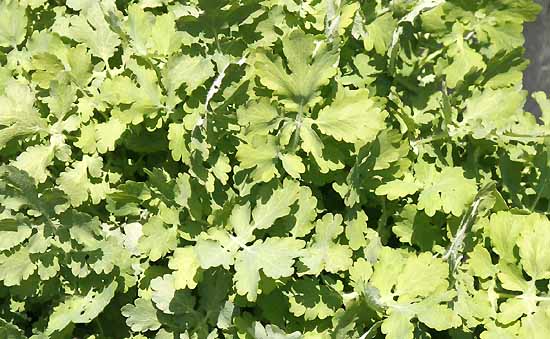 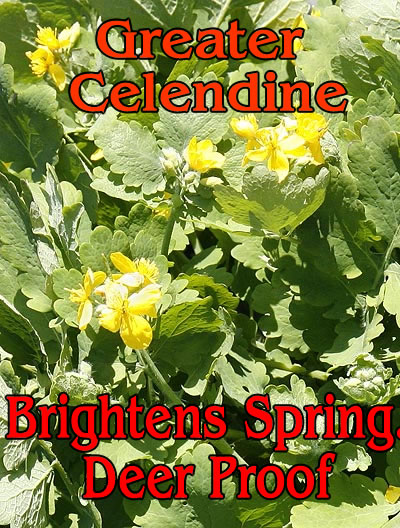 A lovely shade loving perennial plant that is ideal for woodland settings. Will naturalize in woodlands and bring them to life in late spring with a mass of bright yellow flowers floating in blue-green foliage. Once established these plants take little or no maintenance. It is a short lived perennial hardy to zone 6 but it will self seed in suitable surroundings and may take over an area if not watched. It likes a good moist soil, which is most often found in woodlands, but it will also grow on semi shaded walls and rock gardens. Ideal for rocky wooded locations. Due to the alkaloid content this plant is not eaten by deer or rabbits. It is considered mildly poisonous but only if ingested or exposure to the orange latex of the stems

Description of Greater Celendine. Chelidonium majus
A perennial hardy to zone 6. The plant begins with a clump of slightly bluish mid green leaves that are up to eight inches long and three inches wide. They are compound in groups of 5 -9. Leaflets are arranged in opposite pairs on the leaf stem with a tri-lobed section at the top. All are soft, deeply lobed with wavy edges. The leaflets are mostly hairless but the leaf stems have long white hairs that become sparser as they ascend the plant. IN late spring the plant produces flowers in flattish clusters at the ends of the stems. Flowers are about ¾ inch across with 4 yellow petals and numerous yellow stamens surrounding a stout green style. Flowers are arranged in groups of 3-8 on branching stems. The plant produces many clusters at the same time and can be prolific. Flowers are followed by slender pods up to two inches long which hold the small black seeds. In most cases the plant will flower only once in mid to late spring but flowers can appear at any time during the season into mid fall. All parts of the plant will exude a yellow/orange sap when broken. This can cause skin problems in some people. The plant is considered to be mildly poisonous.

Location and Care of Greater Celendine. Chelidonium majus
Will grow in almost any soil except waterlogged but it does like a reasonable amount of water. Ideal plant for part or full shade but it will grow in full sun in lower zones (6 & 7) provided it has moisture. Prefers a rich woodland soil in semi shade with decent moisture. It is an excellent choice for growing on partially shaded walls or in rock gardens provided there is a pocket of soil to establish its roots. It is a short lived perennial but it will self seed in suitable locations, sometimes aggressively and will take over thin woodland areas if left alone.

Growing Greater Celendine from Seed.
Germination can be slow and erratic with some seeds taking up to twelve months to sprout.
Can be sown in place in early spring or late fall. If choosing this approach keep weeds in the area to a minimum to allow seeds time to germinate and plants to establish. Once the first ones are established they often self seed and proliferate, but this can take several years to achieve.
Seeds and also be started in pots. Individual pots with several seeds per pot or cell flats are recommended so seedlings can be removed as they grow without disturbing other seeds. Some will often germinate rapidly but others may not so patience is needed. Start indoors in later winter and remove plants as they become large enough to transplant. Place rest of growing medium outside in a semi shaded area and continue to water throughout the year picking out seedlings as they appear. It is best if they pots/flat are placed on a bench or shelf to reduce weed seed introduction to the growing medium. Trays can be left out over winter if all the seeds have still not germinated.

Harvesting Greater Celendine
Celandine plants are harvested during the spring when they begin to bloom. Herb can be used fresh or dried for later use. Roots are harvested in the fall when they are at their peak. These can also be dried for later use.
It is highly recommended that gloves be worn when harvesting any of this plant from leaves, roots or seeds. The latex is mildly toxic and many people have a allergic reaction that can cause rashes and skin

Edible Uses of Greater Celendine.
It is reported that the leaves can be eaten if boiled well and water changed several times. Only really used in times of acute famine.

Medicinal Uses of Greater Celendine. Chelidonium majus
Greater Celandine has a long history of use in herbal medicine. The leaves and the sap are used most often as a mild sedative detoxifying and antispasmodic especially for relaxing the bronchial tubes, intestines and muscles as well as whooping cough, asthma, jaundice, gallstones and gallbladder pains. Caution should be taken when using this herb internally since it contains the many alkaloids that are considered toxic. The orange sap is used externally to treat warts, ringworm and corns as well as films from the cornea of the eye. The roots are also used and research has shown them to have possible anticancer properties.

Known Hazards
The whole plant is poisonous, however it is of very low toxicity and this is further y reduced by drying the plant. The stem juice is highly irritating and allergenic and in some cases of extreme exposure has caused paralysis. Large doses taken internally can cause sleepiness, skin irritation, respiratory tract irritation, ulcers and violent coughing May cause burning sensation in the mouth, nausea and vomiting. It also stains the urine bright yellow... Avoid contact with eyes.