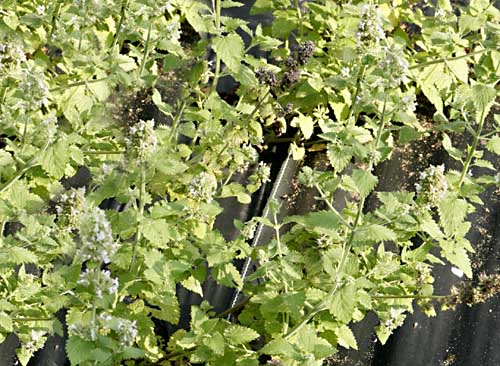 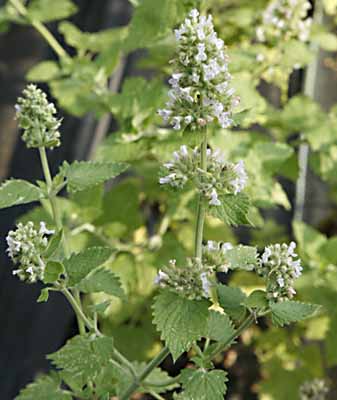 If you like the look of catnip and the pretty flowers but don't like the aroma then this plant is for you. It has the same appearance and very similar flowers which will bloom from early summer until the frost knocks it down for the winter. A tough little perennial that will flower from seed in the first year and comes back year after year. Needs little care and not as much water as most mints. It likes full sun but will deal with partial shade and is not fussy about the soil type provided it is well drained. Deer and Rabbit proof! Cats don't seem to like it much either. They ignore our plants but will totally destroy normal catnip. We don't recommend you grow this for your cat, they might not like it.

Description:
A hardy perennial growing up to four feet in height and a sister variety to the common catmint. It has a similar habit but this one has lemon scented leaves. Dying down in the winter this perennial sends up shoots of aromatic mid to light green triangular shaped leaves with serrated edges and a very light down. Stems are much branched and square like all those in the mint family. In early summer flower stalks rise from the ends of the stems in dense whorls arranged in little circular 'clumps' along the top length of the stem. Each flower is small, whitish or pale pink in color and dotted with red spots. Flowers bloom in each 'clump' all along the stem at the same time, so not all flowers in a clump bloom at the same time allowing the plant to be in bloom and produce interest for a much longer period of time.

Location and Care.
Hardy zones 3-9. Its not a fussy plant and lemon catmint will grow well in almost any kind of soil provided it is not waterlogged. It does best in moderately rich well drained sandy soil where it will produce the most essential oil. These oils tend to be inhibited in heavy soil that drains more slowly.
It prefers to be in full sun but can tolerate some partial shade. Although catmint likes to be watered once established it will tolerate fairly dry periods. This mint is far more drought tolerant than other mints and will manage fairly well provided there is enough rain. However if the plant is being grown for its leaves then water and weekly fertilizer is recommended to obtain the most leaf growth for harvesting. A soaker hose at the base is ideal.

Established plants will flower in the first year from seed and bush out but not as vigorously as normal catnip, at least in the first year. Allow room to spread over successive years.
Apply a 1- to 2-inch layer of organic mulch around the base of catnip plants before their first winter to help insulate the soil and increase moisture retention.

Growing.
As with normal catmint seeds require light to germinate so where ever you sow them make sure they are on the top of the soil.
Outdoors. Catmint can be sown directly sown outside in selected location after danger of frost has passed. Make sure the area stays clear of weeds to allow the seeds to germinate in the light. Keep soil moist until germination occurs and until the small seedlings are large enough to be cut back to daily watering. Thin to about 2 feet apart. Since seed germination can be erratic we recommend starting indoors to avoid weeding and have better control.
Starting indoors. For early start on larger plants sow indoors in late winter to early spring. Ensure the soil is moist until germination and while the seedlings are small.
Germination can be erratic ranging from 14 - 40 days especially at cooler temperatures. Some seedlings come up fast while others seem to take forever. For this reason we recommend either small pots or individual cell plug trays so larger seedlings can be removed without disturbing the rest.
Once the seedling is established it will grow rapidly and will flower in the first year from seed.

Aroma and plant differences from normal catmint/catnip.
Unlike normal catmint (catnip) this plant has a pleasant lemon scent. This does not appear to be a overtone that masks the normal catmint odor. In most description of this plant on the internet it appears to be listed just like normal catmint with the same descriptions uses and cat loves. We are not sure if this is because its just cloned or because no one has observed the plant.
Our experience is that the plant is treated quite differently. We have ours growing our main field unprotected. The deer and rabbits don't eat it, not a surprise since they don't eat the other lemon scented plants either.
Cats ignore it. We have to grow our catmint inside our deer protected area not to keep out the deer but to keep out the cats. We have one cat and there are many in the area, they don't touch the lemon catnip at all. When offered the dried leaf they just sniff and walk away, no interest. So don't grow this for your cat.
Ants seem to like it. There are many reports of ants being repelled by catmint, we have not seen any on ours or around it and since we are on sandy soil we get a LOT of ants. The lemon catmint is different, the decided to nest right underneath a few of the plants and seem to be running around the rest of it.

Our conclusion is that whatever is in normal catmint is not in the lemon one. For this reason we do not recommend that this plant be used instead of catmint in any herbal remedies with the expectation of the same results. It is likely that this plant does not contain the same compounds. Considering the aroma on catmint it is unlikely that the lemon is just masking the usual aroma it is replacing it.

Medicinal
Not recommended as a substitute for normal catmint, unsure if it contains the same substances.