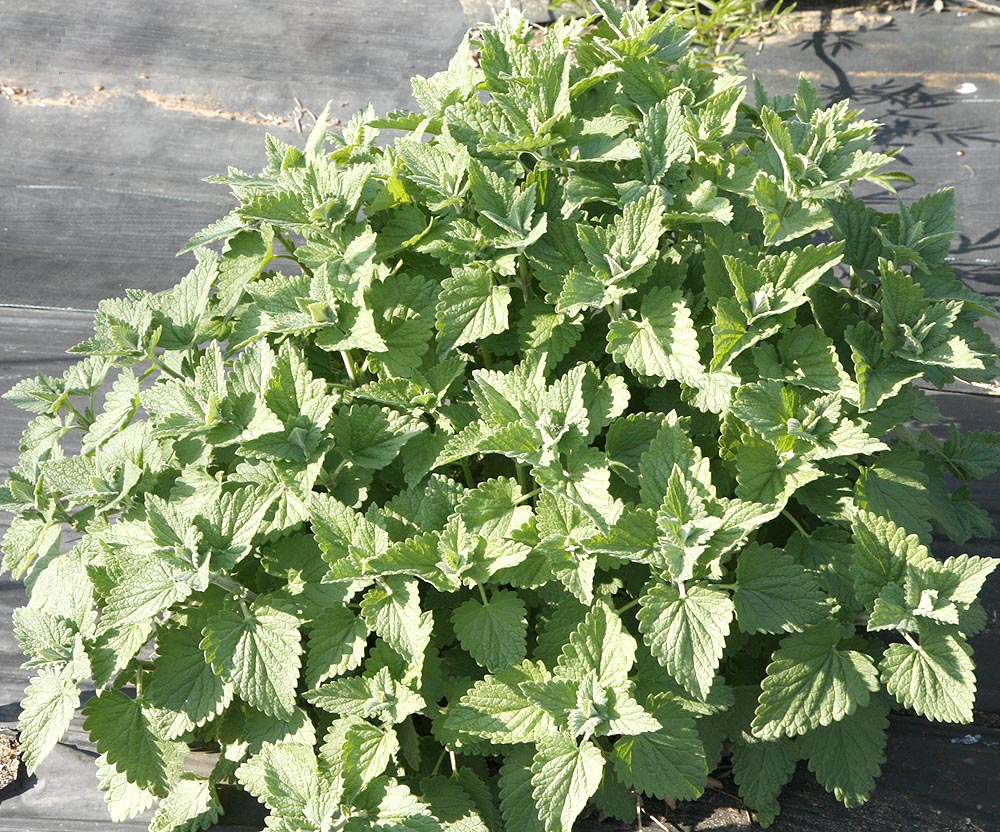 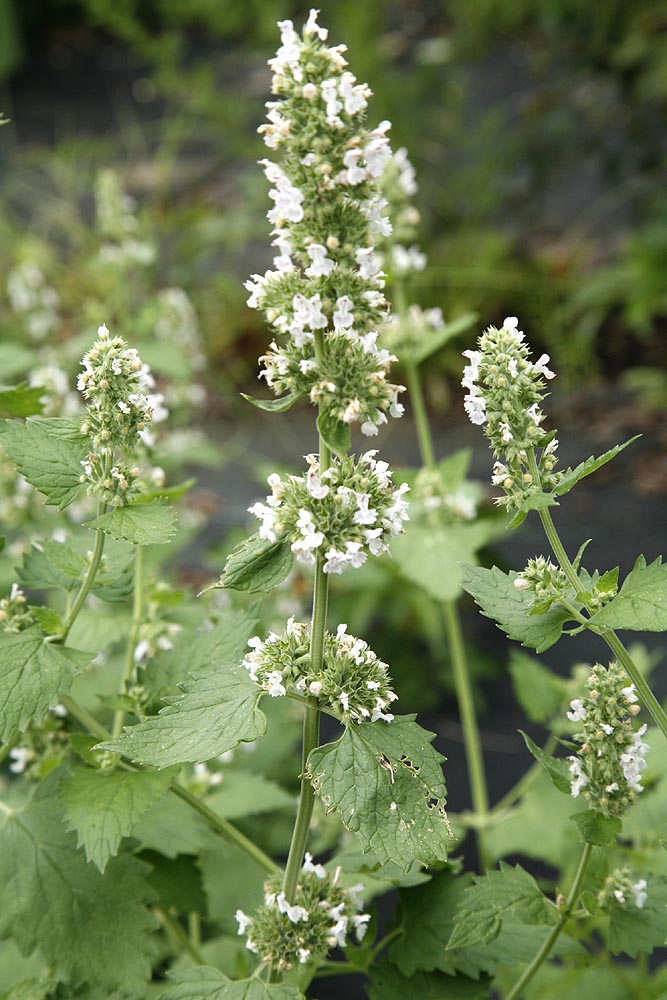 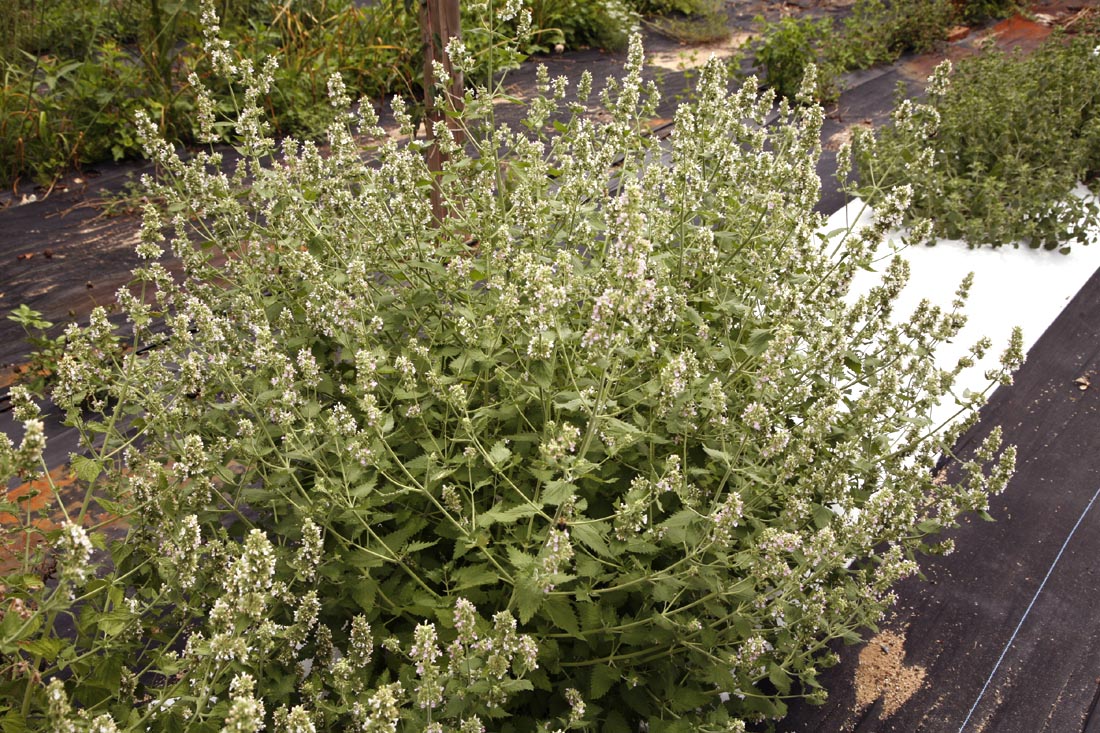 A lovely perennial plant that is easy to grow and needs very little care once established. Fairly drought tolerant and does not spread out as many plants in the mint family do. Has fairly showy white flower stalks that will bloom from early summer until the frost. Lots of leaves which make it look exotic. Deer and rabbits don't eat it. However cats do and will destroy quite large plants if they can. Butterflies and bees love the flowers.

A Perennial mint, so it dies down to the ground in cold winters. In spring begins to send up square erect branching stems that reach 2-3 feet in height. Leaves are heart shaped with toothed edges. They are bright luscious green to begin maturing to darker green and covered with a soft close down especially on the undersides which can look almost white. In early summer the branches produce flower spikes at the ends of the stems. Flowers are arranged in dense whorls arranged in little circular 'clumps' along the top length of the stem. Each flower is small, whitish or pale pink in color and dotted with red spots. Flowers bloom in each 'clump' all along the stem at the same time, so not all flowers in a clump bloom at the same time allowing the plant to be in bloom and produce interest for a much longer period of time.

Catnip seeds require light to germinate so where ever you sow them make sure they are on the top of the soil.
Outdoors. Catmint can be sown directly sown outside in selected location after danger of frost has passed. Make sure the area stays clear of weeds to allow the seeds to germinate in the light. Keep soil moist until germination occurs and until the small seedlings are large enough to be cut back to daily watering. Thin to about 2 feet apart. Since seed germination can be erratic we recommend starting indoors to avoid weeding and have better control.
Starting indoors. For early start on larger plants sow indoors in late winter to early spring. Ensure the soil is moist until germination and while the seedlings are small.
Germination can be erratic ranging from 14 - 40 days especially at cooler temperatures. Some seedlings come up fast while others seem to take forever. For this reason we recommend either small pots or individual cell plug trays so larger seedlings can be removed without disturbing the rest.
Once the seedling is established it will grow rapidly and will flower in the first year from seed.

Hardy zones 3-9. Its not a fussy plant and catmint will grow well in almost any kind of soil provided it is not waterlogged. It does best in moderately rich well drained sandy soil where it will produce the most essential oil. These oils tend to be inhibited in heavy soil that drains more slowly.
It prefers to be in full sun but can tolerate some partial shade.
Although catmint likes to be watered once established it will tolerate fairly dry periods. This mint is far more drought tolerant than other mints and will manage fairly well provided there is enough rain. However if the plant is being grown for its leaves then water and weekly fertilizer is recommended to obtain the most leaf growth for harvesting. A soaker hose at the base is ideal.

Established plants bush out and can spread to about 3 feet or more producing lush foliage with new shoots coming up all year long. Ensure you allow enough room for them to spread.
Apply a 1- to 2-inch layer of organic mulch around the base of catnip plants before their first winter to help insulate the soil and increase moisture retention.

If you have cats or cats in the neighborhood it is recommended that you grow the plant in a protected area or at least provide some protection for the catnip plants or the cats may totally destroy them.

Catnip is considered to be an aromatic herb, however aromatic does not mean 'smells nice' it just means it has an aroma. Some people quite like it but other think it smells more like a skunk. The aroma will vary depending on your soil type and nutrients within it but the compound nepetalactone is what give it its distinctive smell. It is believed that the smell is similar to certain cat hormones which is why cats find the plant so attractive.

Any cats in your neighborhood will certainly be attracted to the plant. About 30% of cats don't have any attraction to the plant, others don't seem to like the fresh leaves but do find the dried ones irresistible. If you just want to grow your plants to entertain your cats that's fine. However if you want to collect the leaves either for them at a later date or for you (yes catmint is a human herb too) then you need to protect it. The best way is to grow it behind a cat proof fence or put a fence around the individual plants. IN some cases companion planting it with citronella and other strong smelling herbs like lavender or thyme which cats don't find so attractive can help to protect it.
Catnip is good to plant in the vegetable garden as it is reported to repel cabbage pests, aphis (including peach aphis), flea beetles, cucumber beetles and squash bugs from plants they grow near to. Deer and rabbits don't eat it.

Leaves can be harvested at any time after the plant has reached eight inches in height. Cut back but leave at least four inches from the ground to ensure regrowth. The best leaves will be those before the plant has flowered but it can be cut back several times during the year to retard flowering and increase leaf production.
Dry leaves either by bunching stems together and hanging upside down in a dry warm place or by stripping from the stalks and drying on racks on in a dehydrator. Keep out of the sun to prevent bleaching of the leaves. Store in tightly closed jars or plastic bags.

Catmint is not just for cats, its for people too. It is most commonly used to treat colds and flu espeically those involving fever, as it can help promote sweating and induce sleep without increasing the heat in the body which helps to remove toxins and reduce fever and cold virus symptoms. Catmint also has a very calming effect making it very useful in treating insomnia as it works as a mild sedative. It has been used for centuries to treat digestive problems. It is also good for motion sickness, anxiety, stress, nervousness mostly due to its calming properties. Usually taken as a tea and often considered more effective when combined with elderflowers when used in fevers. The leaves and the flowering tops contain the most active compounds. Can be used as a tea or a tincture.

Other Uses of Catnip/Catmint (Nepeta cataria).

Catmint is most well known as a cat treat. Most cats love catnip and many people grow the plant just to amuse their cats. Beware however every cat in the neighborhood will be at your catnip bush! Its also a very useful plant for bees and butterflies love it.