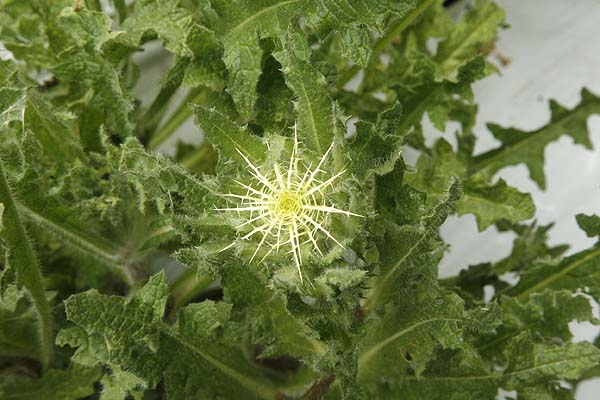 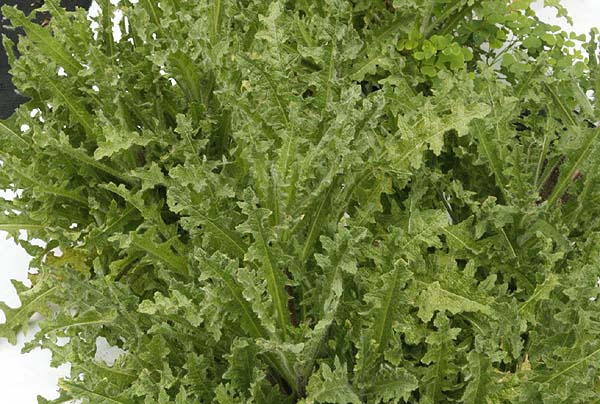 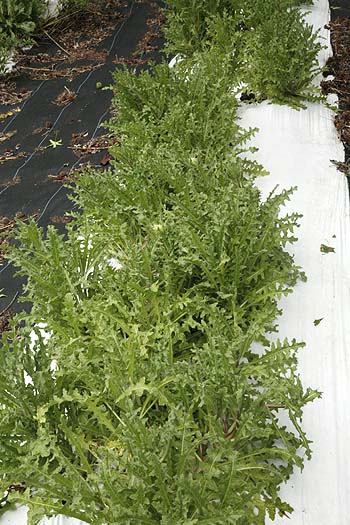 A really easy plant to grow, makes a good low border plant or annual ground cover. Once established it fairly drought tolerant but will not produce a lush crop of leaves if not watered. Its fairly deer proof due to the prickly/downy leaves. The sprawling habit and unusual yellow flowers make it an interesting plant although not particularly showy. Will flower until the first hard frost. The leaves are edible, so are the roots, and it's a good herbal plant. Its not quite a sow and forget it plant but its fairly close.

Description of Blessed Thistle (Cnicus benedictus)
Although this plant has fairly strong stems it often prefers a prostrate habit rather than standing upright. When it does manage to stand up it only grows to about two feet in height. The stems are reddish, fairly slender and much branched. The leaves are long and fairly narrow with very prominent central vein and irregular wavy margin that cuts almost to the central vein. They are dull mid green in color and covered with fine white spines and hairs.
The flowers are small pale yellow and have the look that they are 'still to open' as the yellow portion is a small tuft of petals in the center of a network or white prickly spines that surround the flower like a crown of thorns - hence the name.
The whole plant is covered in a thin prickly down.

Growing Blessed Thistle (Cnicus benedictus) from seed
Best sown in early spring. The seeds are large and easy to handle. Since seeds are large they can be directly sown after all danger of frost has passed. Allow two feet between plants.
If starting indoors begin in late winter with one seed per pot. These seeds are too large for seed trays. Plant about half inch deep. Germination usually takes about 14-21 days depending temperature. Grow on until plants are large enough to be hardened off then planted outside. See our General Growing instructions for more seeding details.
In zones below 8 seeds may be sown outside in late fall where they will germinate and produce a rosette which will overwinter and grow in spring. However this is not recommended for cool sites or locations. It is far better to grow and treat as a annual.

Location and Care of Blessed Thistle (Cnicus benedictus) .
Really needs full sun. It is very tolerant of most soil types but needs good drainage will die in waterlogged soil. Water in well and daily until the plants are established then they are quite drought tolerant but will not produce an abundant crop of leaves or flowers with little water. Dip irrigation or a soaker hose is the best method to water once a day. The plants tend to sprawl with flowers and leaves creeping along the ground so allow plenty of room. Flowers until the first hard frost.

Harvesting Blessed Thistle (Cnicus benedictus).
Harvest the leaves before the plant flowers. If leaf harvest is required the plant can be cut back 2-3 times during the growing season to promote more leaf growth. Some flowers should be left to create seed for next year but since the birds also like them ensure you harvest your seed before they do it for you. Make sure you wear gloves!

Medicinal Uses of Blessed Thistle (Cnicus benedictus).
The leaves are edible as are the roots which can be boiled as a vegetable. Leaves should only been eaten in small quantities as they can act as an emetic producing vomiting with little pain and inconvenience. This can be very useful when vomiting is required.
The leaves and upper stems are used medicinally either as a tincture or dried for use in tea. It has been used to treat many ailments cine medieval times and was once considered a 'heal all'. Today it is used most commonly to promote milk production in lactating women, to aid in menstrual problems, as a digestive aid and as liver and blood-purifying tonic. It was also once used to help treat plague victims.

Name confusion.
Blessed thistle is most commonly listed as Cnicus benedictus but in some places as Centaurea benedicta. Some sources claim that this is reclassification of this plant. However many of the descriptions of Centaurea benedicta show upright plants with purple flowers which is obviously not this plant at all. Also Blessed Thistle contains a volatile oil, and a bitter, crystallineneutral body called Cnicin, obviously named after the plant making it even more likely that Cnicus is the correct latin name. For these reason we are sticking with it until can be thoroughly persuaded otherwise.