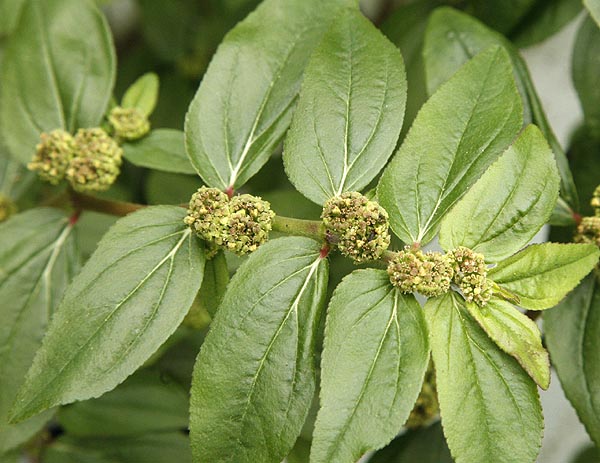 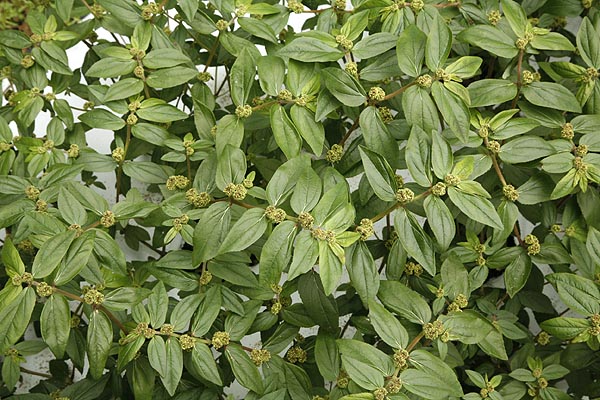 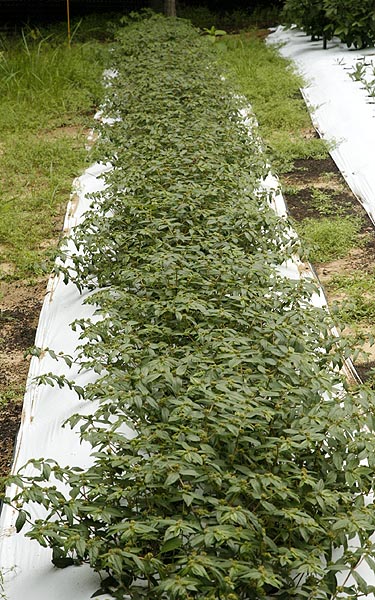 An extremely powerful herb and interesting ground cover. It's a tropical annual but can easily be grown in sunny northern gardens as an annual. Will grow well to zone 6, experimental above that. While the flowers are fairly nondescript knobby pea like structures, they produce massive amounts of heavy pollen which makes this plant a magnet for pollinators especially those, like bees, who need the pollen protein to make more baby bees and store it up for winter use. Heavy pollen means it does not blow around much so allergy sufferers are fairly safe. In fact this is one of the major go to herbs in treating asthma, hay fever and other respiratory complaints as well as many other maladies. The plant makes a great low growing ground cover for sunny dry areas as its pretty drought tolerant and while it prefers to grow on sand or gravel it will grow in almost any soil as long as its well drained. Its branching habit ensures that it will cover areas quickly, covering problem areas in a dense green mat. Deer and rabbits don't eat.

Fairly prostrate plant growing about 12-14 inches (20-35 cm) tall. Consists of long stiff slightly reddish stems with opposite pairs of mid to darker green leaves. These are lance shaped (technically elliptical lanceolate) with deeply indented white veins and very fine toothed edges. Stems branch and form a low growing mat that covers the ground. The flowers begin to appear very quickly in early summer. The are only seen as green balls 1/2 inch (15 mm) in diameter that look like knobby peas but are technically called a 'cyathium'. It consists of lots of very tiny green flowers about flowers. Each cyathium is produced from each pair of leaf bracts along the stem and at the tops of the stalks. Each leaf bract can produce one or more pea sized flower balls. The flowers are not really easy to see individually. Flowers bloom from the cyathium all season long producing flowers and seed at the same time so its hard to tell when the seed is ripe. This plant produces amazing amounts of pollen and is beloved by many pollinators but not butterflies. The seeds drop often and if isolated look like miniature golden boats. The branches when broken exude a milky white latex that is common in most Euphorbia species. Plants will continue to grow and flower until frost knocks them back.

Very easy to grow from seed. Needs some warmth to germinate so wait until temperatures are warm before sowing. Best started inside to get a good jump on the weather. If starting early use a heating mat on low to encourage germination. For more details on growing seeds see our general growing instructions.

Grow seedlings on in individual pots until about 4 inches (10 cm) tall before planting out. Ensure that the temperatures are warm before setting out and harden plants off gradually to full sun before transplanting.

A native to Tropical America but it can be grown easily in warm summer gardens. Needs full sun for best results. Plant in areas where it has room to spread and wont overrun other plants. Grows rapidly and branches out to short wide ground cover. Prefers a well drained soil and does not do well in wet conditions. Not really fussy about soil type but some organic material will aid its growth. Fairly drought resistant makes an interesting ground cover for hotter dry areas where little else is growing but will not reach full size without additional water. Its ideal location is sandy or gravel like soil in full sun, good on old driveways or areas that little else is growing on. Dies back in winter. Some say it has a taproot, perhaps with little water is does we found the roots are mostly shallow surface and easily pulled out if care is not taken.

Asthma Herb is an annual and while it will drop seed if left alone rather than harvested seed does not overwinter well in cold zones and plants do not come back. For hotter areas seeds may overwinter and produce new plants the following year. If in an undesired area these are very easily removed as roots are fragile and plants easily pulled out. If left in areas that need ground cover it may reseed itself the following year and repopulate the area.

If harvesting for medicinal uses cut plants down as they come into flower. If done soon enough in the year plant will regrow.

Young shoots are reportedly edible but not recommended a famine food, used when all else fails.

This is one of the go to herbs for treatment of asthma. It relaxes the bronchioles but its action can also depress general respiration so it is usually used in a formulation with other anti asthma herbs most commonly Lobelia inflata and or Grindelia spp. It is also used on combination with Datura metel and sometimes lobelia to produce asthma cigarettes. While asthma is the most common respiratory disorder it is also used for bronchitis, hay fever, laryngeal spasms, emphysema, coughs, colds and various other lung complaints.
While heralded as a respiratory herb it has many other uses. In Tropical Africa it is widely used as a treatment for amoebic dysentery and many other intestinal parasites and also for other gastrointestinal disorders, including diarrhea, peptic ulcers, heartburn and vomiting. It is included in the African pharmacopoeia for its used in dysentery.
It is also reported to be an effective pain killer and is used to treat severe headache, toothache, rheumatism, colic and pains during pregnancy. It is used as an antidote and pain relief of scorpion stings and snakebites
It has antipyretic and anti-inflammatory properties so is used externally in the treatment of warts, scabies, tinea, thrush, aphthae, athlete's foot, fungal afflictions, measles, Guinea-worm and as an antiseptic to treat wounds, sores and conjunctivitis.
Other reported uses include use as a diuretic to treat uro-genital diseases, such as kidney stones, menstrual problems, sterility and venereal diseases especially syphilis. Its also used for jaundice, hypertension, oedema, anemia and malaria, as an aphrodisiac, and to facilitate childbirth has also been reported.
The sap is applied to warts in order to destroy them and to facilitate removal of thorns and splinters from the skin.

Caution. large doses can cause gastro-intestinal irritation, nausea and vomiting so use sparingly and with expert guidance if possible.

Being so effective in humans its fungicide properties are also effective in plants and research has reported success in defeating vascular wilt (Fusarium oxysporum), soft rot infection caused by the bacteria Erwinia carotovora pv. Carotovora, tobacco mosaic virus on Nicotiana glutinosa, sugarcane mosaic virus-A. It is also effective against several types of nematode infections as well as larvae of the tick Boophilus microplus. Additionally it's a potent molluscicidal activity against the a variety of freshwater snails.

Some claim that the latex is toxic and ingestion is not recommended. However this is most likely transposed from other Euphorbia species where the latex can be toxic. Other Euphorbia's are also used to treat skin disorders but ingestion is not recommended. E hurtia is somewhat different but is tarred with the same brush due to failure to research the plant effectively.

I thought Lobelia was Asthma weed!

That is the interesting and often dangerous problem with common names. Different plants get called the same common name and then the wrong plant is used. Its why Latin names are so important and the only ones used in true herbal medicine. Yes Lobelia inflata is called Asthma weed in the United States, this is because its where it grows naturally so it's the one the locals used to treat asthma. E. hurta is a tropical plant that grows in the warmer parts of America but more commonly in Africa and Asia where it was used to treat asthma and a whole bunch of other things. For the most part E. hurta does not have a common name in America since it has not been as widely used but with the influx of different races bringing different plant knowledge and researchers going overseas and 'discovering' these plants it will most likely have more use in future. For the moment we are choosing to call it Asthma herb as most people don't like to use Latin names but it also distinguishes it from Lobelia inflata which is more commonly known as Indian Tobacco which is why we have chosen to call it that and avoid confusion.