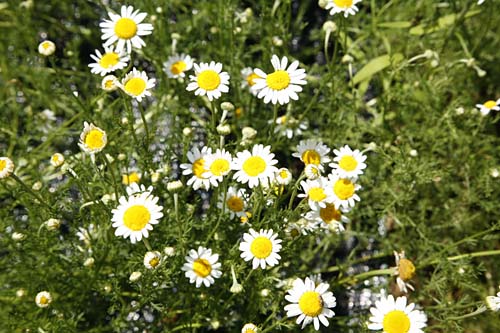 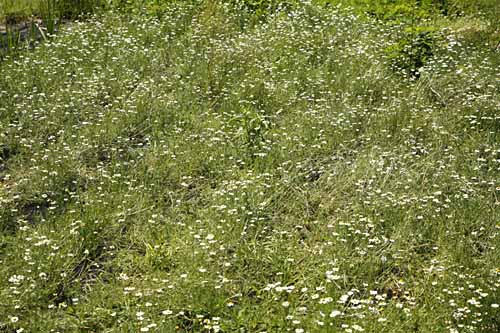 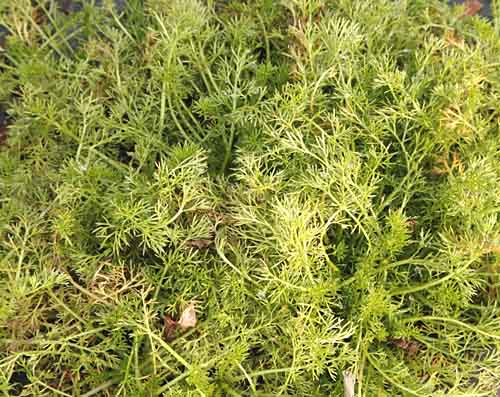 This is true chamomile which should not be confused with German chamomile that is also used in herbal preparations.
Roman chamomile is a low growing evergreen perennial. It can be used as a ground cover, prefers full sun to very partial shade on well drained soils. These can be poor and it needs little water once established, however if you intend to harvest the flowers extra water is suggested. Roman chamomile does not tolerate hot dry weather well, it may grow but it will be straggly. Both the flowers and the foliage of this chamomile are scented with the characteristic apple aroma, it is an easy plant to grow and deer don't seem to eat it.

Description.
A perennial herb with short much branched creeping rhizomes. In most cases it is evergreen, at least to zone 6 and 5. It ranges from 4 to 12 inches (10-30 cm) in height. It has finely divided pinnate leaves with inrolled margins arranged alternately on hairy stems. The apple to mid green leaves give the whole plant a delicate feathery appearance. Flowers arise from mid spring to mid summer depending on your zone, with the major blooming in early to mid spring (in zone 6) but other flowers being produced throughout the year. Each flower is born solitarily on the end of a longer stem. They have conical solid yellow centers surrounded by white ray florettes and look very daisy like. There are some eighteen white rays arranged round a conical centre, botanically known as the receptacle, on which the yellow, tubular florets are placed- which is much more conical than that of a true daisy. Roman chamomile flowers are less prolific than those of German chamomile (Scented Mayweed) but they are considerably larger so less are required to make herbal preparations.
The plant increases in size from a central mass in early to mid spring with a burst of growth that tends to slow as the season progresses.

Growing.
Chamomile seeds need light to germinate so never cover the seed. Roman chamomile is best started indoors and potted to grow reasonable sized plants before placing in the garden. Once established chamomile is very tough plant and can take some foot traffic giving off a pleasant aroma with each step. It is not however hardy enough for a lot of traffic. This variety of roman chamomile is also not suitable for lawns (for this purpose the non flowering but still aromatic Trenague variety is used which can only be propagated from cuttings.)
Roman chamomile is very tough and needs little maintenance once established. It will continue to grow out from a central core spreading its rhizome further each year. In cooler areas it may produce a good ground cover but it cannot tolerate hot dry weather. In zone 6 the plants grow well proliferate but they don't beat out the weeds which grow between the creeping rhizomes. In most cases a chamomile bed will need hand weeding each year, usually several times per season.

Location.
Roman chamomile prefers a sunny location full sun is ideal but it can tolerate some morning or afternoon shade. For maximum flower production a well drained soil with a good component of organic material and fertilizer is essential. The plant will grown well on poor soils and even slightly higher acidity but it will not produce as many flowers. Do not plant in waterlogged or heavy clay soils without serious soil amendment. Once established the plants will need to be weeded as they don't seem able to beat out the weeds.

Harvesting.
Flowers should be snipped from the plant when they are in full bloom. This can be done using a pair of snips, scissors or for larger areas a chamomile rake can be used. Chamomile rakes are box like contraptions with tines. The rake is slide around the flower and the pulled upwards to snap the flowers from the plant. Although this does make the job easier care must be taken to hold the plant from below to prevent it from being pulled from the ground. Using the rake to vigorously causes the flower heads to catapult out of the rake bed and onto the ground.
Flowers can then either be sun dried or dried in a dehydrator. Be aware that if you are intending to grow for use a herbal tea you need a LOT of plants to produce only a small amount of flowers for tea. Dried flowers are small and take up little space. If you drink a lot of herbal tea you will need quite a large chamomile bed to sustain you.

Warning.
There are many plants that look similar to chamomile. If harvesting in the wild (or from migrating seeds in your garden) make sure that the plant you have really is chamomile. Few others have the same distinctive aroma and the leaves are characteristic but the flowers can be very similar in many species some of which can be dangerous if taken in larger doses so always make sure you have the correct plant.