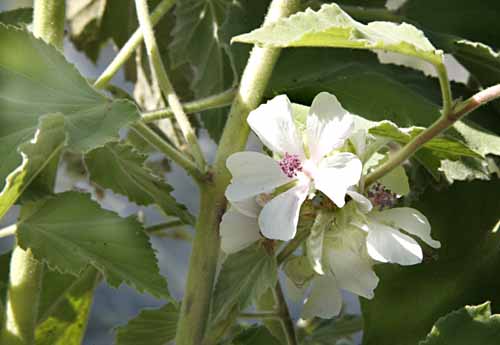 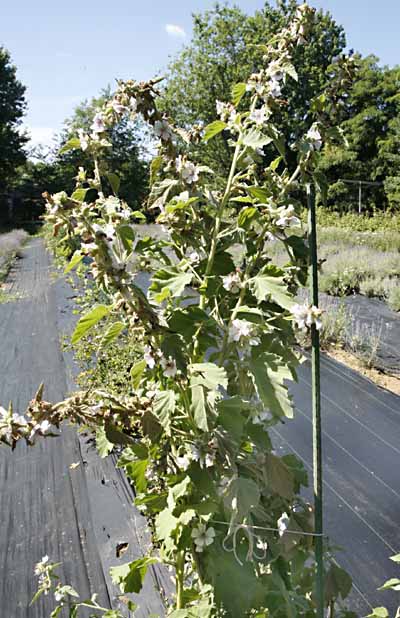 Lets talk about texture. Some plants just have it others don't. Marshmallow is one that does. Its soft almost furry light green to silver leaves and luxurious to the touch. Match that with the abundance of light purple to white flowers makes this tall perennial a great addition to any garden. Despite its name it does not need to grow in a marsh and will tolerate almost any soil type provided it is given water. While it can tolerate some dry conditions a short daily watering with a soaker hose will have it soaring to over six feet in height (183 cm). Prefers full sun but will take some shade but may then need staking. Deer and rabbits don't eat it mostly because of those charming textured leaves. It's hardy to zone 3 this tough perennial needs little care once established and just keeps coming back year after year to beautify your garden, attract butterflies and bees and produce food and medicine. The whole plant is edible and while the roots are the most commonly used part of the plant the leaves and flowers are also edible and can be used interchangeably. The root or leaf water can be boiled down to the consistency of egg whites and used as a substitute to make desserts and other items, - more interesting texture. This was once used to make the Marshmallows now sold in stores. Sadly no longer, while these treats were once a healthy digestive aid, today its all chemical and sugar and only the name of the plant which began this treat remains.
Description of Marshmallow (Althaea officinalis).
A perennial herb that dies down in the winter. In spring it sends up many unbranched stems that are slightly velvety due to fine hairs. The leaves thick, three to five lobed with serrated edges and deep veins and covered with a fine down giving them a silvery sheen and very soft feel. They are 2-3 (5-7.6cm) inches long and about 1 ¼ inches across and are arranged alternately on the stem. At each leaf node on the main stem a slim branch is produced that carries several additional smaller leaves and clusters of flowers that appear in late mid summer and bloom through early fall. The flowers have five separate petals and are usually pale pink to off white with a group of purple to lilac stamens and anthers in the center. Flowers are about two inches across and a borne in clusters near the ends of the branches. The flowers are followed by small hairy fruits about 1/3 inch (0.76cm) across that contain the seeds.
Most reports state that the plant reaches the height of 3-4 feet (91-121cm). However ours commonly reach 5 and often top six feet (152-183 cm) in height.
Marsh mallow is most commonly known for its thick long tough though pliant taproot that is used in many herbal remedies.
Roots
The roots are thick long and tapering, very tough and pliant, whitish yellow outside, white and fibrous within. They can be eaten as a vegetable and taste similar to a parsnip. However they contain a large quantity of mucilage, a gummy substance that was once used as a thickening and is still used in herbal remedies today.
Marsh Mallow herb plants prefer moist soils. Some gardeners recommend a fall planting so that the cold temperatures aid in the germination of the Marsh Mallow herb seed. It is known to self-seed but not in an aggressive way.
Growing Marshmallow (Althaea officinalis) from seed.
Germination of seeds can be erratic so patience is required. Stratification of seeds (a period of cold) can improve germination rates and times. All our seeds are pre-stratified. Due to erratic germination we recommend sowing indoors where seedlings can be pricked out and grown on as they appear. Sowing directly can cause a lot of weeding while waiting for seedlings to appear.
Sow seeds 10-12 weeks before the last frost date. Use either in cell pots or with a few seeds to a small pot to help prick out individuals as they grow. Use a light potting soil with good organic material content rather than heavy soil. Keep seeds trays moist at all times, never let them dry out. Place near a sunny window or under a grow light.
Pot on into individual pots and grow on until large enough to plant outside. Harden off plants gradually do not place directly in full sun or plants will burn. Transplant to desired location. Plant about 3 feet (91 cm) apart and water in well. Make sure that plants have a good constant supply of water always. A soaker hose around the base is ideal. Run for at least an hour a day to give them enough water more in very hot dry spells. For more details on growing seeds see our General Growing Instructions.

Transplanting older plants should be done either in late fall after the plant has died down or early spring before the stems have grown. Plants can be dug up and divided. Plants are hard to dig due to the large tap roots and will take some work to move so choose your spot wisely in the beginning and avoid extra work.

Location and care of Marshmallow (Althaea officinalis).
Despite its name Marsh Mallow does not need to be grown in a marsh. It can be cultivated in almost any garden and is quite happy on almost any soil type and can even tolerate fairly dry conditions. It will tolerate moist soil conditions and damp areas but does not like a fully waterlogged soil. It does prefer to have regular watering especially if planted on well drained sandy soils. It is not drought tolerant, using a soaker hose to water is ideal.
It needs full sun and does not tolerate shade well. It may need staking if the stems become tall or they will fall over in the winds. Some protection against a fence or such will help keep the stems upright. However a small stake is often totally obscured by the foliage and does not detract from the plants attraction. the but may need some protection from the winds if the stems become tall.
Due to its height it makes a great back border plant or even a seasonal screening plant. A great plant for sunny ditches or waste moist waste ground where height is needed. Will not do well without watering. Once established it will continue to grow bigger with every season.
It is hardy to zone 3 but may need a little mulching in areas where the temperatures dip below 15°F /-9°C it is reported hardy down to -13°F / 25°C.
Harvesting Marshmallow (Althaea officinalis).
Roots can be harvested in the fall. Dig up wash and dry the roots. Wait until the end of the second year to harvest roots from newly seeded plants. These can be air dried or use a dehydrator.
Flowers and leaves can be harvested throughout the year. Do not harvest from first year before the plant has reached two feet in height. Take individual leaves as needed or cut a whole stem. Harvest flowers in full bloom best in the morning after the dew has dried off by the sun. Marshmallow can be susceptible to blight so harvesting earlier in the year before it reaches the older leaves is essential.
Edible Uses of Marshmallow (Althaea officinalis).
Leaves can be used as a thicker for soups stews in small quantities. In large quantities the mucilage is too strong and makes them unpalatable. The raw leaves have a pleasant taste if you don't mind the hairy texture.
Roots can be used as a vegetable either boiled or fried. The water from preparing either the roots or the leaves can be boiled down until it has a similar consistency to egg whites and then used as a egg white substitute for making meringues and other dishes. This is how the original marshmallow confectionary was made, to be used as a healthy digestive aid. Sadly this is no longer the case the only thing remaining in the 'marshmallows' sold today is the name of the plant the rest is mostly sugar. A rather pleasant tea is made from the flowers and also from the roots but this tends to be a little more of an 'acquired taste'.
Medical uses of Marshmallow (Althaea officinalis).
most commonly the roots are used to treat an inflamed digestive tract but is also used for the urinary and respiratory systems. The gummy mucus especially from the roots is useful where the natural mucus has been abraded from the coats of the intestines. It is also claimed effective for hemorrhage from the urinary organs and in dysentery. The root boiled in milk or wine is claimed to be excellent for relieving chest congestion as well as coughs, bronchitis, whooping-cough. It is frequently given in the form of a syrup, which is best adapted to infants and children.
More recently many herbalist have determined that the leaves are just as effective as the root for the mucilage content and are available in a more steady supply. They also provide the digestive aid without the accompanying starch content that the roots provide. Which is used will most likely depend on the herbalist and the malady being treated.
Externally is used to cure bruises, sprains or any ache in the muscles or sinews. Using a piece of marshmallow root of a gel thereof on a wound it will increase the healing time. This is said to be especially effective on wounds that wont heal normally.
Other uses of Marshmallow (Althaea officinalis).
The root can be used as a toothbrush or chewed by teething children. It is used in the cosmetics industry to help soften the skin and the dried root powder is used to bind active ingredients when making pills for medicinal use. The roots can also be boiled down to make a glue and the stems can be used in paper making.
Other names
Althaea, Marshmallow, Mortification Root ,Sweetweed, Althea, Mallards, Sweet Weed, Hock Herb, Wymote, Schloss Tea Marshmallow: March Mallow root, White Mallow root, Althea and Cheeses. Sweet Weed, Mauls, Mortification plant, Mortification Koot, Guimauve.