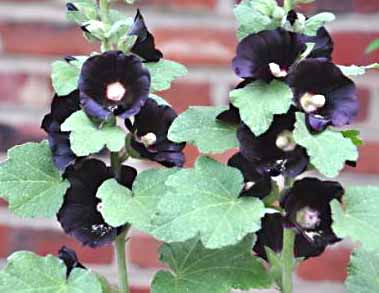 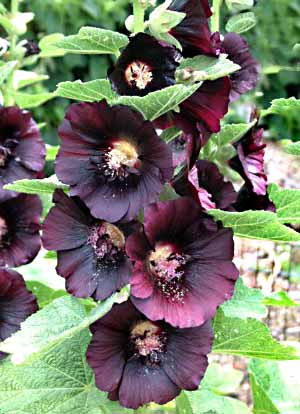 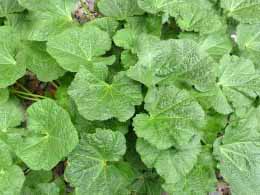 Great easy to grow plant for height and drama. Tall flower spikes are great against a fence, wall or back border. The dark almost black flowers offer a good contrast and make an unusual plant. Can tolerate most soil types and needs only moderate water but must have good sunshine. Deer don't eat it, neither do rabbits. Butterflies love it.
Flowers from seed second year, may live for several years or may behave as a biannual. This is not predictable some plants may live and other from the same seed batch may not.

Description.
A short lived perennial that sometimes acts like a biennial it is hardy zone 2-9.
IN early spring a small rosette of generally heart shaped mid green leaves arises. Leaves have lobed edges and rough texture with strongly defined veins. In mid spring it sends up a tall flower spike that can reach 8 feet in height but is more commonly between 4-6 feet. Each stem can produce dozens of large cup shaped dark maroon almost black flowers 3-4" across that are set amongst smaller rough leaves. Flowers are produced a few at a time along the stem and flowering can last for several months. Blooms second year from seed. Sometimes plants die after blooming but many can live for several years and perform well as short lived perennials.

Location and Care.
Hollyhocks need full sun but are very tolerant of soil type and can easily grow on very poor soil, in fact they prefer a poorer soil and produce better flowers than on rich soils. Must be fairly well drained cannot tolerate waterlogged soils or those that become waterlogged in the winter months. pH should be in generally neutral range although a little acid or alkaline is tolerated it will not grow in soils that are very strongly one of the other.

Grow in a sheltered site as the flower stalks are long and can be blown over in high winds. Up against a fence, wall or side of a building is excellent. IN hotter climates - zones 8 -9 shelter from the heat, try growing on the north side of structures to help keep them cool in the heat of the summer. Staking may be necessary as stalks grow taller or they can bend and droop over. Plants can be pinched out as they begin to form stalks to encourage them to branch. This will produce more stalks of shorter height and thus more flowers.
Water daily until established then as needed during the summer months. If there is sufficient rain no other watering is necessary but if on sandy or loam soils a small daily watering can be helpful. Soaker hoses around the base of the plants are ideal.
Hollyhocks are one of the few plants that can grow beneath black walnut trees as they can resist the toxins that the tree produces.
Plants can become quite large so space at least 24-36" apart.
Mulch with at least 4" of material in late fall to protect for the winter. Remove in early spring to allow leaves to form early. Deer resistant.

Growing.
Seeds need some light to germinate so surface sow. Outdoors seeds can be sown two weeks before last frost date. Surface sow in desired location. Seeds can also be sown in fall for early spring germination.
Indoors sow 6-8 weeks before last frost date. Surface sow on compost. Germination can be anywhere from 12-21 days depending on temperature and other conditions. Keep soil moist but not wet. Don't use an overly rich potting soil as it can encourage damping off. Since seeds are large sowing 1-2 in individual pots is the best method of sowing. Separate seedlings when large enough to handle and grow on until at least 6" tall before gradually hardening off to outside before transplanting.

Problems
Unfortunately Japanese beetles also like hollyhocks so do spider mites the later mostly because they are growing in hot dry areas which spider mites love. Spray with light misting of water to deter spider mites. Foliage is also susceptible to rust especially as the year progresses this does not tend to affect the flowers or the flowering habit of the plant.

Edible uses.
The flowers leaves and roots are edible. Young leaves can be chopped and used in salads older leaves have unpleasant texture which most people dislike. Flowers and flower buds are also good in salads.

Medicinal uses.
Black hollyhock flowers have long been used in herbal medicine (but not other flower colors). Dried flowers are used as a tea to treat chest complaints, improve blood circulation and for the treatment of constipation, dysmenorrhoea, hemorrhage. The root is astringent and demulcent[240]. It is crushed and applied as a poultice to ulcers[218]. Internally, it is used in the treatment of dysentery.

Other uses.
A fiber obtained from the stems is used in papermaking. Flowers are also used dried as a coloring for wine, and as dye for wool where it can produce several different colors depending on how it is prepared. Also makes a good cut flower and dried flowers in pot pourri.